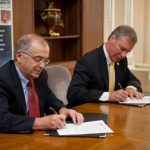 Georgia Tech President G.P. “Bud” Peterson and JPL Director Charles Elachi signed a memorandum of understanding that outlines how the two organizations will work together to identify and enhance research and educational opportunities in space systems and instrument definition and design.

The agreement also promotes personnel exchanges between Georgia Tech and JPL to encourage participation of students, postdoctoral fellows and faculty in JPL research, as well as involve JPL engineers in research and teaching at Georgia Tech.

“We anticipate great things through this partnership,” Peterson said. “I would say the sky is the limit, but it’s really the universe. This partnership is a natural fit because both institutions thrive at the intersection of science, technology and engineering.”

Elachi said the agreement will strengthen the already robust relationship between Georgia Tech and JPL.

“Georgia Tech is one of the nation’s top engineering schools, and JPL always wants to associate itself with the best,” Elachi said. “We are excited to collaborate with the Institute on future projects that will provide great benefits for JPL, Georgia Tech and the United States.”

Dozens of Georgia Tech alumni have been hired by JPL in just the past five years, including three graduates who were part of the entry, descent and landing team for the Mars Curiosity rover. The National Aeronautics and Space Administration (NASA) supports nearly one-third of the research conducted by faculty in Georgia Tech’s School of Aerospace Engineering.

JPL is NASA’s key resource for deep space systems, especially for the deployment of planetary science missions and supporting technology.

“JPL’s world leadership in deep space exploration via robotic missions is of particular interest to Georgia Tech, as we are involved in robotics research in numerous applications,” Peterson said.