Leaders from Georgia Tech participated in the release of the President’s Advanced Manufacturing Partnership (AMP 2.0) final report, a one-year endeavor to outline a roadmap to secure U.S. manufacturing competitiveness. Georgia Tech President G.P. “Bud” Peterson served on the 19-person AMP 2.0 Steering Committee and numerous faculty and staff put in many hours serving on various workstreams that focused on different aspects of manufacturing competitiveness.  This effort builds on the original AMP which kicked off in 2011 and ended in 2012 and also included Georgia Tech as one of a select few universities invited by the White House to participate. 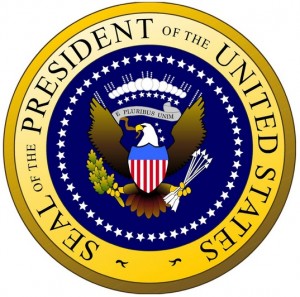 Both President Obama and Commerce Secretary Pritzker attended the out-brief from the AMP Steering Committee on Oct. 27, 2014 in the Roosevelt Room of the White House, and Georgia Tech Provost Rafael Bras represented Georgia Tech.

“The Georgia Tech community should be proud of the role that our team played in influencing this important report,” said Georgia Tech President Peterson. “Manufacturing has been central to Georgia Tech’s mission since its founding and we’re honored to add our collective experience and expertise to help grow the manufacturing economy in our country.”

Building upon the report, Obama announced a series of executive actions to strengthen U.S. advanced manufacturing, including a $300 million investment in the emerging technologies of advanced materials including composites and bio-based materials, advanced sensors for manufacturing and digital manufacturing.  Read about the multi-agency and private sector effort >

Following the White House meeting, Georgia Tech researchers were invited panelists at a briefing hosted by the Innovation Policy Forum of The National Academies to discuss the report’s recommendations for enabling innovation, securing the talent pipeline and improving the business climate for manufacturing. Georgia Tech’s Tom Kurfess, Professor of Mechanical Engineering, addressed the report’s findings for enabling innovation, specifically on developing technologies to build a National Network for Manufacturing Innovation (NNMI). Jennifer Clark, Director of the Center for Urban Innovation at Georgia Tech, spoke on Improving the Business Climate and recommendations related to Scale-up Policy. The U.S. has been the leading producer of manufactured goods for more than 100 years, but strengths in manufacturing innovation and technologies that have sustained American leadership in manufacturing are under threat from new and growing competition abroad.

The AMP 2.0 report identifies the role of the Executive Office of the President in coordinating the federal government’s advanced manufacturing activities and defines responsibilities for Federal agencies and other Federal bodies in implementation.