The Contracting Education Academy at Georgia Tech returned to the nation’s capital on November 9th to provide training to 160 counselors who work for Procurement Technical Assistance Centers (PTACs) across the country.

PTACs — supported by the Defense Logistics Agency and local hosts in 300 cities in the United States, Guam and Puerto Rico — work with tens of thousands of businesses who seek advice on how to identify and win government contracts.  The trade group that represents PTACs — the Association of Procurement Technical Assistance Centers (APTAC) — is holding its membership training conference in Washington, D.C., this week (November 9-12, 2014).

For the first day of the conference Georgia Tech’s Contracting Academy designed and presented a customized, four-hour training session entitled “Counseling Businesses for Government Contracting Success.”   The session consisted of limited lecture, instead relying heavily on a series of seven instructor-guided case studies which class participants worked-through in teams.  The case studies reinforced “The Seven Principles of PTAC Counseling” which the Academy developed based on research conducted earlier in the year.

Participants in the training also were given the opportunity to develop “personal action plans” during the workshop, setting goals for improving their individual performance as business counselors in the coming year.  The Academy provided action plan templates and suggested performance improvement ideas throughout the workshop.  A set of electronic resources also were made available to the counselors on a web site designed especially for them. 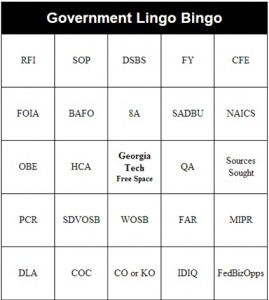 One popular feature of the training session was a game, developed by the Academy’s instructional design team exclusively for participants, called “Government Lingo Bingo.”  Each workshop attendee was given a unique bingo card, containing a set of acronyms associated with government contracting.  Based on the instructor’s use of acronyms during the workshop, participants circled corresponding acronyms on their cards.  Any time during the workshop participants had a vertical, horizontal or diagonal line of circled acronyms, they called out “Government Lingo Bingo!”   But the game didn’t end there.  Only if they could correctly state what each acronym stood for, did participants win a prize.

Each student was also given a 90-page workbook containing a detailed discussion of counseling techniques, including a “Glossary of Government Contracting Terms” to encourage them to look-up and learn new government terminology.

In post-workshop evaluations, 97% of attendees rated the session met expectations or exceeded expectations.

This is the fourth time the Academy has been invited by APTAC to provide half-day training to its general membership. The Academy’s instructor Kevin Grimes conducted the November 9th workshop.  Chuck Schadl, Group Manager of Government Contracting Services, and Donna Bertrand, the Academy’s Program Manager, coordinated workshop details.