While the mid-term elections have raised uncertainty about government operations under a Republican-controlled Congress, one area where observers expect to see some action is in an overhaul of the way the Pentagon buys weapons. The current system takes far too long and creates enormous uncertainty for both industry and the military services. Too often, programs cost more and take far longer to develop than planned, and by the time new weapons are actually fielded, the technology is outdated. 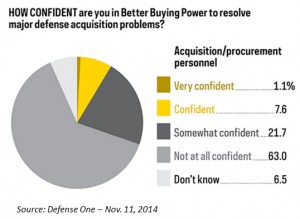 Although there’s a lot of debate about what to do, there’s plenty of bipartisan agreement that something serious needs to be done. For more than a year, Sen. John McCain and Rep. Mac Thornberry have been exploring various reforms with their colleagues. In 2015, the Republicans from Arizona and Texas, respectively, will be in positions to advance some of those ideas.

Early last month, the Senate’s permanent subcommittee on investigations published a compendium of essays by assorted experts on the Defense Department’s system for buying new weapons. The contributors were engineers, bureaucrats, industry executives and political players from both parties. Their views on reform differed, but there was widespread agreement on the need to create more effective incentives for industry as well as the acquisition workforce.

To get a sense of how Defense personnel perceive the problem, we asked Government Business Council, Government Executive’s research arm, to take a poll of our readers. An October poll of 378 Defense Department employees found that few are confident that the acquisition process provides the weapons and equipment the military needs, less than half believe defense industry has the capacity to innovate to ensure U.S.technological superiority, and, perhaps most troubling for military leaders, the vast majority doesn’t think the Pentagon’s premier reform initiative—Better Buying Power—is working.

Keep reading this article at: http://www.defenseone.com/management/2014/11/6-charts-show-what-defense-personnel-really-think-about-acquisition-process/98792