As the F-35’s expected price tag settles around $165 million per plane, DoD is trying to trim the much larger operations-and-maintenance bills to come.

The Pentagon, which has spent the last four years lowering the purchase price of the F-35 Joint Strike Fighter, is now taking aim at the costs of flying it. 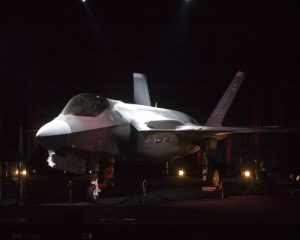 The headline-grabbing $400 billion price tag for developing and buying 2,443 U.S.F-35s is less than half the cost of operating, maintaining, and upgrading all of those jets for the next half-century. In March estimates, various Pentagon offices put the total of those expenses at $859 billion and $1 trillion.

Top program officials met this week with executives from the companies that are building the F-35. The annual summit had a new venue — Norway, not the jet’s Fort Worth assembly line — and a fresh agenda: having largely moved beyond nagging design and production problems, the group discussed the future of the world’s most expensive weapons program.

Keep reading this article at: http://www.defenseone.com/management/2015/05/pentagon-trying-make-its-400-billion-fighter-jet-cheaper-fly/114037