The “Doomsday Plane” weighs 800,000 pounds when fully loaded and can withstand the effects of a nuclear bomb or asteroid blast while remaining aloft for 12 hours without refueling. 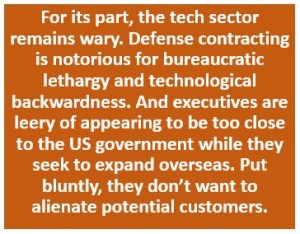 First deployed in 1974, the Boeing E-4B has been the preferred mode of long-range transportation for US secretaries of defense ever since. But when Ashton Carter’s staff discovered the behemoth would literally crush the runway in Sun Valley, Idaho, where he planned to attend the annual gathering of tech elite at the Allen & Co. conference, the SecDef nimbly switched to a sleek Gulfstream V. He jetted in with just a few aides, his wife (the conference is something of a family affair), an overnight bag weighing less than 10 pounds—and the message that the US military has a new spirit of agile entrepreneurialism.

The DOD of course has a long history of jump-starting innovation. Historically, it has taken the megafunding and top-down control structures of the federal government to do the kind of investing required to create important technology for the military. Digital photography, GPS, the Internet itself—all were nourished by defense contracts before being opened up to the private sector, which then turned them into billion-dollar industries.

Keep reading this article at: http://www.wired.com/2015/11/secretary-of-defense-ashton-carter