An Ann Arbor, Mich.-based weapons contractor agreed to pay the government $25 million last month for having knowingly delivered flawed holographic rifle sights to the FBI and the Defense and Homeland Security departments. 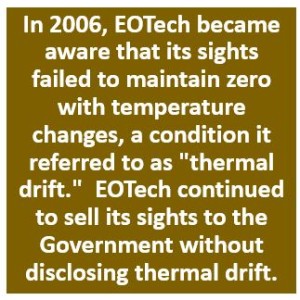 EOTech, according to the government’s complaint released December 1st by the Defense Department inspector general, knew during seven years of sales that there were deficiencies in its weapon sights — designed to allow users to find a target and return fire — in environments with extreme heat or cold.

The subsidiary of L3 Communications Corp. has long manufactured and sold “combat optical sights” that can be mounted on weapons used by special operations forces, primarily at the U.S. Naval Surface Warfare Center in Crane, Ind.

Keep reading this article at: http://www.govexec.com/contracting/2015/12/contractor-who-delivered-faulty-weapon-sights-pays-25m/124104