There is still a significant schizophrenia within the government generally, and particularly in the Defense Department, over the use of commercial items and services. 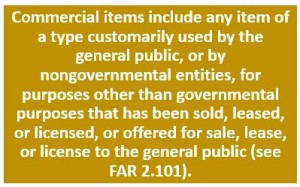 As arcane as this issue might sound, it is actually one of the core lynchpins to the government’s ability to drive innovation and gain access the best solutions from the broadest possible array of providers. In other words, arcane or not, it really matters.

For two years in a row, DoD asked Congress for legislation to dramatically change the statutory definition of a commercial item or service. Both times Congress summarily, and wisely, rejected these proposals. Then in early August, DoD issued a proposed procurement rule that would achieve much the same result as the legislative proposal, albeit in a more nuanced way. And Congress noticed.

In early November, more than 50 members of Congress, from both sides of the aisle, signed an unusually sharp letter to the department calling for the proposed rule to be rescinded.

Keep reading this article at: http://www.govexec.com/excellence/promising-practices/2015/11/congress-weighs-defense-procurement-gaps/124039