The Department of Defense has been following a congressional directive to reduce spending on civilian and contract employees, the department told the Government Accountability Office. 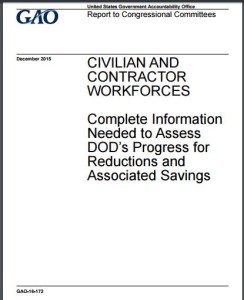 However, GAO investigators say they can’t find the data to back this up.

GAO looked into whether the DoD has been complying with a mandate in the 2013 National Defense Authorization Act to bring down staffing levels and reduce expenses on the civilian side on par with similar reductions to military personnel, which total about 7 percent since 2012.

Keep reading this article at: http://www.federaltimes.com/story/government/management/agency/2015/12/30/dod-civilian-spending/78089194/