The highest-ranking official charged so far in a massive Navy bribery scandal was sentenced in federal court on March 25, 2016 to 46 months in prison for giving classified information to a foreign defense contractor in exchange for prostitutes, luxury travel and other gifts. 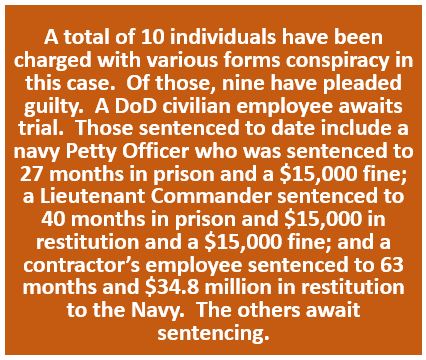 U.S. Navy Capt. Daniel Dusek was sentenced by U.S. District Judge Janis L. Sammartino of the Southern District of California, who also ordered Dusek to pay a $70,000 fine and $30,000 in restitution to the Navy.  He was ordered to report to the U.S. Bureau of Prisons on June 15, 2016.

Dusek, 49, pleaded guilty in January 2015 to a single count of conspiracy to commit bribery.  Dusek admitted that he used his influence as Deputy Director of Operations for the Seventh Fleet, headquartered in Yokosuka, Japan, and later as executive officer of the USS Essex and the commanding officer of the USS Bonhomme Richard, to benefit Leonard Glenn Francis and his company, Glenn Defense Marine Asia (GDMA).  For decades, GDMA provided port services to U.S. Navy ships and in return, Francis plied Dusek with meals, alcohol, entertainment, gifts, dozens of nights and incidentals at luxury hotels and the services of prostitutes, Dusek admitted.

Underscoring his importance to the conspiracy, in an email to one of his employees, Francis wrote: “(Dusek) is a golden asset to drive the big decks (aircraft carriers) into our fat revenue GDMA ports.”

“As a Navy officer, Captain Dusek took an oath to bear true faith and allegiance to the United States,” said Assistant Attorney General Leslie R. Caldwell.  “Instead, he chose self-interest, greed and prurience.  And when he learned of the investigation, Captain Dusek deleted his email accounts in an attempt to shield his crimes from law enforcement.  The Department of Justice is committed to holding public officials responsible when they betray the public trust.”

“Captain Dusek’s betrayal is the most distressing because the Navy placed so much trust, power and authority in his hands,” said U.S. Attorney Laura E. Duffy.   “This is a fitting sentence for a man who was so valuable that his conspirators labeled him their ‘Golden Asset.’”

“This outcome again sends the message that corruption will be vigorously investigated and prosecuted,” said James B. Burch, Director of the Department of Defense’s Defense Criminal Investigative Service (DCIS).  “This is an unfortunate example of dishonorable naval officers who recklessly risked the safety of our troops by trading classified information for cash, extravagant gifts and prostitutes.  Cases such as these are not motivated by need or other difficult personal circumstances; they are the product of simple greed.  This investigation should serve as a warning that those who compromise the integrity of the United States will face their day of reckoning.  DCIS and our law enforcement partners will pursue these crimes relentlessly.”

“Captain Dusek put greed and personal pleasure above the safety of his shipmates and, in doing so, violated his sworn oath as a naval officer,” said Andrew Traver, Director of the Naval Criminal Investigative Service (NCIS) .

According to Dusek’s plea agreement, he hand-delivered Navy ship schedules to the GDMA office in Japan or emailed them directly to Francis or a GDMA employee on dozens of occasions, each time taking steps to avoid detection by law enforcement or U.S. Navy personnel.

Soon after, Francis asked Dusek to exercise his influence on GDMA’s behalf by steering the aircraft carrier USS Abraham Lincoln and its associated strike group to Port Klang, Malaysia (PKCC) – a port terminal owned by Francis.  Dusek replied in a series of emails to GDMA in late August 2010 that he would make it happen.  “Good discussion with N00 (Admiral) today and convince him that PKCC is the better choice,” Dusek wrote to Francis on Aug. 21, 2010.  Three days later, Dusek reported to Francis that he had “everyone in agreement that the next CSG (Carrier Strike Group) through the AOR (area of responsibility) will stop at PKCC.  Dates will be 08-12 Oct.”  The port visit cost the United States approximately $1.6 million.

On Sept. 17, 2013, when Dusek learned that Francis and Navy personnel had been arrested, he deleted the contents of his email accounts in an effort to avoid detection by law enforcement.

To date, 10 individuals have been charged in connection with this scheme; of those, nine have pleaded guilty, including Dusek, Lieutenant Commander Todd Malaki, Commander Michael Vannak Khem Misiewicz, NCIS Special Agent John Beliveau, Commander Jose Luis Sanchez and U.S. Navy Petty Officer First Class Dan Layug.  Former DoD civilian employee Paul Simpkins awaits trial.  On Jan. 21, 2016, Layug was sentenced to 27 months in prison and a $15,000 fine; on Jan. 29, 2016, Malaki was sentenced to 40 months in prison and to pay $15,000 in restitution to the Navy and a $15,000 fine; and on March 18, 2016, Alex Wisidagama, a former GDMA employee, was sentenced to 63 months and $34.8 million in restitution to the Navy; the others await sentencing.

The ongoing investigation is being conducted by NCIS, DCIS and the Defense Contract Audit Agency.

Those with information relating to fraud, corruption or waste in government contracting should contact the NCIS anonymous tip line at www.ncis.navy.mil or the DOD Hotline at www.dodig.mil/hotline, or call (800) 424-9098.