In 2013, with a renewed emphasis on bolstering the state’s tourism industry, Tennessee leaders began a procurement process to secure new advertising services. The innovative process serves as a model of modern procurement, and can be easily replicated by other states. 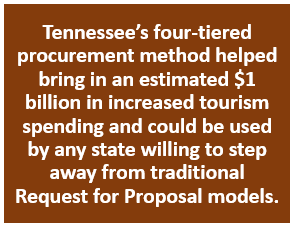 As a result of the services provided by the new vendor, as well as other activities, Tennessee generated an estimated $1 billion in increased tourism spending from 2013 to 2014. And, one of the ad campaigns that resulted from the procurement received the advertising industry’s prestigious Cannes Lion award. Tennessee is the first state to ever receive this award.

The second objective was to use a procurement method that would ensure that the awarded contractor was highly qualified, while still allowing cost to be a factor in determining the award. This was the first time the state had altered its request for proposals process and incorporated a four-tiered approach to determine the successful vendor.

Keep reading this article at: http://www.routefifty.com/2016/05/tennessee-procurement-marketing-advertising/128326