You are here: Home / Government Contracting News / Why agile is still so hard for the government

Getting more of the federal government to buy agile technology services will be anything but quick, analysts say. 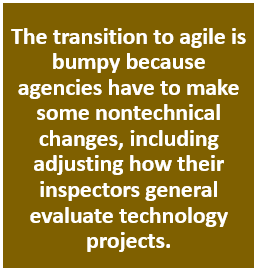 In the past couple years, pockets of the federal government have tried to promote agile software development, a process in which customers and coders work closely on small chunks of larger tech projects, rapidly spinning out and testing prototypes.

One example is the General Services Administration’s tech consultancy team, 18F, which debuted a pre-approved list of vendors who specialize in this methodology; other groups, including the Homeland Security Department, are following suit. Many private-sector tech recruits, including members of 18F, have made it their mission to eliminate the waterfall approach, in which a product’s requirements are decided upfront and then revisited, often years later, after launch.