You are here: Home / Government Contracting News / DoD now awarding more than half its contract spending without competitive bids

Last week marks the two-year point since the Defense Department — worried that only 56.5 percent of its contracted dollars involved a meaningful competition between two or more vendors — issued a series of corrective actions to reverse a downward slide that’s been ongoing for nearly a decade.

So far, the results are not encouraging.

Data published by the Office of Defense Procurement and Acquisition Policy (DPAP) shows things have gotten worse, not better since those orders were signed. In each quarter of fiscal 2016 thus far, DoD’s overall competition rate has been below 50 percent, meaning something dramatic would have to happen in the fourth quarter for the department to meet its goal of 57 percent for the year. 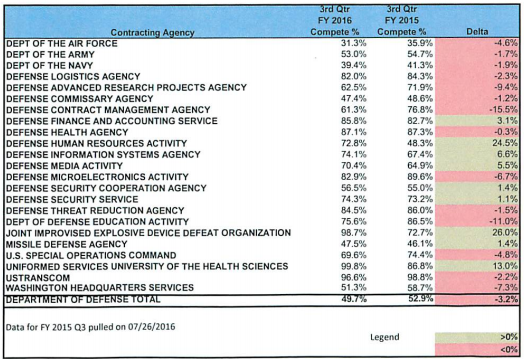 Keep reading this article at: http://federalnewsradio.com/dod-reporters-notebook-jared-serbu/2016/08/dod-now-awarding-half-contract-spending-without-competitive-bids/