M.L. Mackey and her husband started their company, Beacon Interactive Systems, 22 years ago. Since 2002, they have made their living primarily selling software to the Navy. As far as defense contractors go, theirs is a small business, to be sure: In the last 14 years, Beacon has booked almost $14 million in direct sales to the government, and done even more work as a subcontractor on other projects. 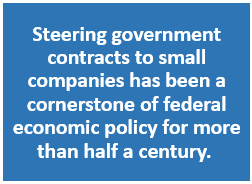 But recent work building shipboard operating software for energy management — a project, Mackey says, that has been “extremely well received from the waterfront to the Pentagon” — has led Mackey to think bigger. “We’re actively transitioning our Navy products into maritime internet of things and manufacturing internet of things products,” she said. The company, she says, has formed strategic partnerships to launch itself back into the private sector as a prelude to building an internal sales force. Meanwhile, she anticipates that within a few years, she’ll be bidding on, and winning, much larger Navy contracts — worth as much as $15 million.

Mackey credits Beacon’s success building the energy management software to a close working relationship with Navy program managers. “We were able to brainstorm and iterate directly with our fleet customer and develop a technology that directly addressed their needs,” she says. “When they wanted to do more, they were able to directly engage with us. And we as a company have more of the I.P. we need to bring to the private sector market expansion. But none of this would have happened if I didn’t have a prime contract.”

Keep reading this article at: http://www.forbes.com/sites/robbmandelbaum/2016/09/30/congress-appears-poised-to-gut-government-contracts-for-small-business/#4009748a2e3d