You are here: Home / Government Contracting News / Relying on bid protests is ‘absurd’

Former U.S. Chief Technology Officer Aneesh Chopra is not a fan of the contracting community’s increasing reliance on bid protests as a means to delay new contracts and capture taxpayer dollars as long as possible. 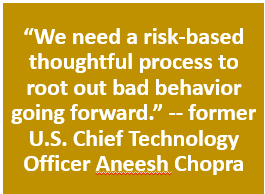 “This protest thing really ticks me off; it is so pathetic,” Chopra said Oct. 6 on a panel hosted by Nextgov and Government Executive.  “It’s absolutely absurd how the culture of PhD procurement physics works in this town. Ninety percent of them don’t actually go anywhere but they delay everything.”

Chopra made the remarks on a panel assessing President Barack Obama’s IT legacy. In an increasingly competitive market amid government shutdowns and dwindling budgets, bid protests in the federal government have increased 60 percent since fiscal 2008. But their success rate—how often the Government Accountability Office sustains them—has declined from 21 percent in fiscal 2008 to 13 percent in fiscal 2015, according to Deltek data.

GAO said contractors filed 1,652 protests in fiscal 2008; they filed 2,639 in fiscal 2015. Those numbers led top contracting officials at the General Services Administration to suggest in August that agencies should build protest periods into their contracting schedules.

Keep reading this article at: http://www.nextgov.com/cio-briefing/2016/10/aneesh-chopra-relying-bid-protests-absurd/132433