Last week’s House-Senate agreement on the 2017 Defense Authorization Bill contained about 100 provisions dealing with acquisition — not all of which we’ll even attempt to summarize in this space. 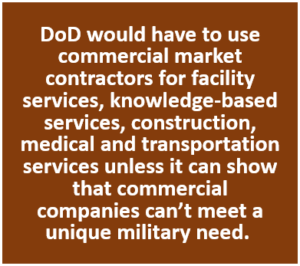 But several were built around a common reform theme Congress began in last year’s bill, attempting to reform the acquisition system to suit a world in which leaders of the Defense committees believe that most innovation is happening in the commercial sector.

Besides restructuring and bifurcating the large front office that’s currently responsible for both acquisition and R&D, the bill adds several new authorities that build on last year’s trend of letting DoD sidestep the traditional acquisition system.

“The national security problem starts from the fact that we no longer drive research and development,” Bill Greenwalt, a senior Senate Armed Services Committee staffer, said at an event hosted by the Center for a New American Security last week. “We reformed the system 20 years ago to try to access commercial items, but it’s not as agile as we would like it to be. It’s risk-averse, it’s compliance-oriented, and it’s optimized to win the Cold War against an adversary that thought in five-year plans.”

Keep reading this article at: http://federalnewsradio.com/dod-reporters-notebook-jared-serbu/2016/12/defense-bill-includes-numerous-provisions-prod-dod-toward-commercial-buying/