Ohio launched a new kind of RFP Jan. 5 aimed at improving participation on the part of smaller cloud-based analytics companies. 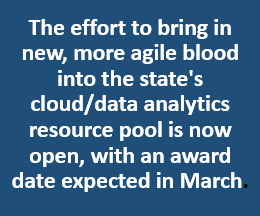 Government Technology first reported on the effort in early December, when state CIO Stu Davis outlined his goal of not only streamlining IT procurements within state government, but also making state contracts accessible to lesser-known service providers.

According to the state’s procurement opportunity website, an inquiry period will be open until Feb. 3, and bids will be opened by the state on Feb. 17. The website lists the estimated award date as March 17.

Davis said last December that he had informally partnered with 18F, the digital federal consultancy within the General Services Administration (GSA), for advice on how to better align state resources under the Ohio Department of Administrative Services’ purview.

Keep reading this article at: http://www.govtech.com/data/Ohio-Launches-Highly-Anticipated-18F-Style-RFP.html