Acquisition reform has become somewhat of a chaotic practice unto itself. It often complicates more than it solves. Proposals are layered upon other proposals, often requiring the rolling back of previous reform efforts, which are in turn replaced by new efforts, which themselves may still conflict with previous or concurrent efforts. 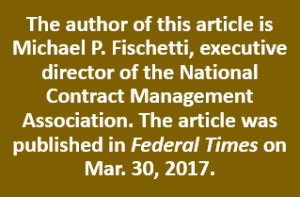 The argument is often made that the Federal Acquisition Regulation (FAR) itself is the problem; that the FAR and its agency specific supplements prevent smart and agile contracting due to far too many onerous and counterproductive requirements. The other side of this argument, often made by those who understand and know how to use the regulations, states that proper acquisition is a people issue, not a regulatory issue.

However, with that said, people can work more effectively when the overriding policies and guidelines are clear, consistent, easy to understand and relatively constant. In this, federal procurement guidelines — as documented in the FAR, Executive Orders, policy letters, memorandums, guides and instructions — can and do certainly and significantly contribute to unnecessary complexity and thus become part of the problem. This problem has grown over succeeding acquisition reform efforts and the steady stream of rulemakings supported by all constituencies involved.

Keep reading this article at: http://www.federaltimes.com/articles/regulatory-reform-starts-with-understanding-commentary