You are here: Home / Government Contracting News / How Pentagon contracting is killing the military’s technological edge

How long does it take to buy a new handgun?  More than a decade, if you’re the U.S. Army. 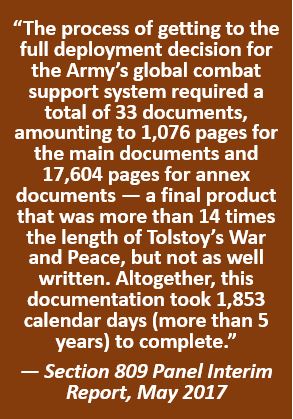 What sounds like the set up to a bad joke is all too real in the world of Defense acquisition. It took the Army 10 years to develop and rewrite requirements for a new handgun when, in 2005, the service set out to replace the M9 Beretta pistol soldiers had carried for decades. The first draft of the Army’s 350-page request for proposals (not counting 23 attachments) issued in 2015 somehow neglected to identify key requirements, such as the caliber of the weapon. As chronicled in a new report on Defense acquisition, “the paperwork alone added an estimated $15 million or 20 percent to procurement cost.” Ruger, a leading manufacturer, was so put out by the costly and complex process of selling to the government that the company chose not to even compete.

That’s just one example from the congressionally-chartered Section 809 Advisory Panel on Streamlining and Codifying Acquisition Regulations of how the arcane and convoluted federal procurement process is costing taxpayers and hurting the military’s ability to field the most effective force. The panel of 18 commissioners, all highly experienced in Defense acquisition, was established in September 2016 to recommend specific and far-reaching changes to the regulatory and legal framework that governs Pentagon purchasing.

Keep reading this article at: http://www.govexec.com/defense/2017/05/how-pentagon-contracting-killing-militarys-technological-edge/137947