U.S. President Donald Trump’s failure to fill dozens of senior-level positions at the Pentagon is making it difficult for defense contractors to forecast business.

Defense company officials, speaking on conference calls after their just-reported quarterly earnings, did not blame Trump directly, but said the lack of appointments to key positions at the Pentagon had slowed contract awards and created uncertainty. 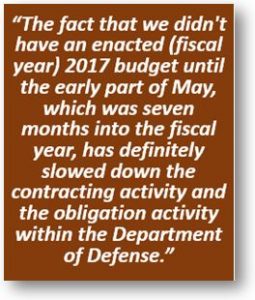 “The still-high number of unfilled leadership appointments and the approaching government physical year-end continue to serve as headwinds,” said Roger Krone, chief executive of Leidos Holdings, on an Aug. 3 call with analysts.

Krone, whose company is one of the largest providers of services to U.S. armed forces, said those open posts have slowed the awarding of government contracts.

The Department of Defense said it has 42 unfilled top-level posts that require Senate confirmation, including general counsel, inspector general and other important roles like secretary of the Army and undersecretary of the Navy.

The Pentagon referred a request for comment on its unfilled posts to the White House. A White House official said: “Democrat obstruction has played a key role in jamming up the president’s agenda.”

Of the 42 open positions that require Senate confirmation, 29 have no nominee identified, while 13 have nominees awaiting confirmation.

Keep reading this article at: http://fortune.com/2017/08/11/trumps-appointments-pentagon-is-slowing-the-defense-industry/