You are here: Home / Government Contracting News / Can agencies seize the moment for modernization?

The coming shift to the Enterprise Infrastructure Solutions acquisition vehicle offers a tremendous opportunity for transformation of agency IT systems, several officials said at an Oct. 25 event — but only if agency officials commit to talking differently about IT modernization. 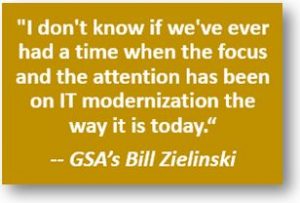 Part of the problem, according to the General Services Administration’s Bill Zielinski, is that many agencies still try to scope out modernization projects with highly specific technical requirements. “We define not only the business outcome that we’re trying to achieve,” Zielinski said at the FCW-hosted IT modernization event, “but we have that tendency to say, ‘and this is explicitly how you’re going to do that.’”

Such specific solicitations tend to produce near-identical proposals from industry, he noted, which forces agencies to select based on “lowest price technically acceptable” criteria. Worse, he said, that prescriptive approach denies agencies the opportunity to benefit from new and creative solutions that might surface if they simply described the business capability that’s needed.

Keep reading this article at: https://fcw.com/articles/2017/10/25/eis-seize-moment-schneider.aspx