As House and Senate conferees close in on an agreement for the 2018 National Defense Authorization bill, the controversial “Amazon” provision remains in play. 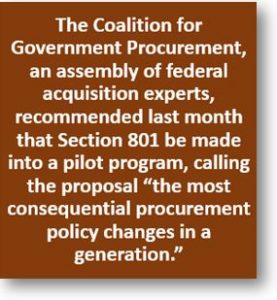 But it seems likely the final version will look a lot different than the current one.

If you aren’t familiar with this provision, Section 801 of the House version of the NDAA would require the General Services Administration to create one or more online marketplaces for agencies to buy commercial items, therefore simplifying the process and reducing costs. House Armed Services Committee staff members say the goal of the provision is to make federal procurement less complex and more competitive.

The Senate version of the bill doesn’t include such a provision, meaning it is one of many differences that have to be ironed out in the conference committee.

And because the Senate Armed Services Committee didn’t include or fully understand the “Amazon” provision, staff members did some last-minute cramming before the conference on the bill started.

Keep reading this article at: https://federalnewsradio.com/reporters-notebook-jason-miller/2017/11/industry-tries-to-prune-amazon-amendment-before-ndaa-is-finalized/