You are here: Home / Government Contracting News / An alternative to acquisition business as usual

Cries for acquisition reform can be heard in the speeches of senior Defense Department leaders and members of Congress. There is much wringing of hands over the slow pace and high cost of fielding defense systems. 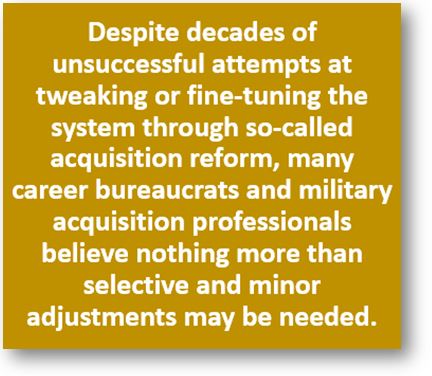 There are concerns that the American defense establishment is not accessing innovations as rapidly and effectively as it should. Mixed in with the speeches, articles and internet blogs are occasional references to “other transactions.” There is but slight evidence that the potential of innovative contracting techniques like “other transactions” is actually understood by those calling for reform.

All the elements needed to create a responsive alternative to the traditional system exist. They were described in “Other Transaction Contracts: Poorly Understood, Little Used” published in the June edition of National Defense. That article described some of the characteristics of contracting authorities found in sections 2371, 2371b and 2373 of title 10, United States Code. This article describes how authority to use other transactions is currently available to create an alternative acquisition system.

Keep reading this article at: http://www.nationaldefensemagazine.org/articles/2017/11/30/an-alternative-to-acquisition-business-as-usual