A congressionally-mandated report on bid protests in the Defense Department appears to validate a view long held by the Government Accountability Office (GAO) and many government contractors: protests are not an excessive burden on the Defense procurement system, and notwithstanding some exceptions, companies are not abusing the process. 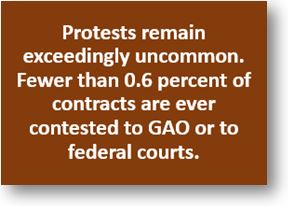 The study, conducted by the RAND Corporation, was ordered as part of the 2017 Defense authorization bill as a compromise to senators who’d introduced legislation that would have restrained companies’ ability to file protests. It found that while protests have been steadily increasing since 2008, the rate at which companies have succeeded in using them to convince the government to alter its procurement decisions or provide some other relief has stayed constant.

“If the increases were due to [frivolous] protests, the effectiveness rate should be falling, which it is not,” the authors wrote. “One possible explanation is that firms are more willing to protest procurements, where, before, they refrained from doing so due to either the costs involved or the potential for creating ill will with the customer.”

Keep reading this article at: https://federalnewsradio.com/contracting/2018/01/rand-study-bid-protests-are-rare-arent-frivolous/