2017 will forever be remembered by Georgia Tech students as the one in which they were overshadowed.  Literally. 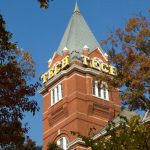 During the first day of classes, August 21, the sun and moon lined up for a total solar eclipse to cast a shadow across campus and much of the nation. Thousands of students joined together to witness the historic event, donning and sharing eclipse glasses to gaze at the heavens.

It wasn’t the only time the cosmos captured our attention in 2017. The year included one of the greatest discoveries in astrophysical history and new surprises at our solar system’s gas giant. On a much smaller level, Georgia Tech researchers tested microneedle flu vaccinations and hurled minuscule gold rods at cancer cells. In the meantime, a student was named a Rhodes Scholar while a robot mashed together the Beatles and Lady Gaga to write its own music.

What will the new year bring to Georgia Tech?  What will our faculty and students discover?  What will they invent? Before we ring in 2018, we look back at 17 Georgia Tech stories that shaped 2017 here: http://www.news.gatech.edu/17-stories-for-2017.