You are here: Home / Government Contracting News / VA secretary on $10 billion health records contract: ‘We have to get this one right’

Embroiled in allegations that taxpayers improperly paid for his wife’s travels, Veterans Affairs Secretary David Shulkin promised to Congress that the agency responsible for caring for more than 9 million veterans would be better stewards of taxpayer dollars. 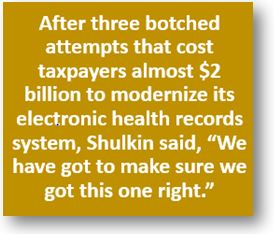 Shulkin, testifying before the House Committee on Veterans Affairs Thursday, told lawmakers he would follow recommendations made by the VA inspector general and personally reimburse the Treasury for several thousand dollars’ worth of expenses accumulated by his wife, who accompanied him on a trip to Europe last year.

Shulkin had been slated to appear before the House committee before the IG report went public to provide insight regarding President Donald Trump’s fiscal 2019 budget proposal, which seeks $198 billion for the department. That budget, however, includes a reduction of 27 full-time positions within the department’s office of inspector general, “leaving OIG far short of their desired staffing level,” said Rep. Tim Walz, D-Minnesota.

Keep reading this article at: http://www.nextgov.com/it-modernization/2018/02/va-secretary-10b-health-records-contract-we-have-get-one-right/146026/