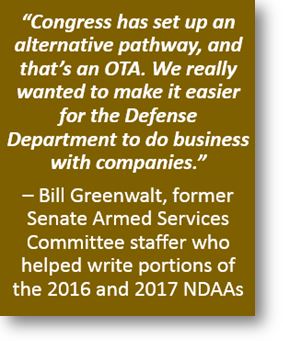 The contract caught many industry players by surprise, in part due to the $950 million value and partly because it was awarded without a traditional government procurement. This deal may be a harbinger for how the Defense Department plans to purchase certain technologies moving forward.

Using buying powers quietly imbued by Congress over the past three years, U.S. Transportation Command made the award to REAN Cloud under an other transaction production contract based on a prototype project last year to migrate military applications to Amazon Web Services GovCloud region. The contract is a type of other transaction authority, commonly called an OT or OTA.

Led by the Defense Innovation Unit Experimental, which acts as a liaison between the Pentagon and industry, the Defense Department is targeting non-traditional suppliers to rapidly provide cutting-edge commercial technologies that address national security and military challenges.

Keep reading this article at: http://www.nextgov.com/it-modernization/2018/02/pentagons-1-billion-cloud-deal-may-signal-new-era-government-buying/146273/