You are here: Home / Government Contracting News / How a Pentagon contract sparked a cloud war

Next month, the Defense Department is expected to bid out a lucrative contract that will task a single cloud provider with building the cloud the U.S. military will use for war. 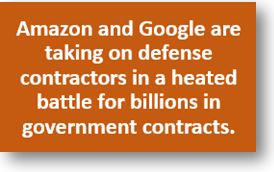 The Joint Enterprise Defense Infrastructure contract—perhaps worth as much as $10 billion over 10 years—will put a commercial company in charge of hosting and distributing mission-critical workloads and classified military secrets to warfighters around the globe.

Many experts believe Amazon Web Services is considered the odds-on favorite to win JEDI because it already hosts classified data, yet public jockeying for the department’s business spotlights a larger battle among industry for dominion over a growing federal cloud market.

The Defense Department awarded about $2.3 billion in cloud computing contracts in fiscal 2017, according to an estimate from Deltek, a research firm that crunches government spending data. Deltek predicts Defense spending on cloud could grow 20 percent year over year through 2022 and a total potential cloud market across the federal government of more than $6 billion. Those estimates came before the department released JEDI and another cloud contract with an $8 billion ceiling.

Keep reading this article at: https://www.nextgov.com/it-modernization/2018/04/how-pentagon-contract-sparked-cloud-war/147788/