You are here: Home / Government Contracting News / How should the tech industry handle high-profile government contracts?

In March, Gizmodo reported that Google had formalized a partnership with the U.S. Department of Defense to improve image recognition capabilities for drones. 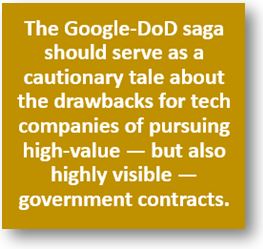 The news prompted an immediate ― and predictably negative ― response. Despite Google’s attempt to message the contract as serving “non-offensive uses only,” news outlets were quick to explore the ethical implications of this partnership and question how the technology could be extended to weaponry.

Google’s leadership anticipated this external response. What they didn’t plan for was the degree of internal backlash they’d receive. Following the announcement of the partnership, Google employees began complaining about working for “the business of war.” Some workers left in protest. In April, about 4,000 Google employees signed a letter to the CEO requesting the cancellation of the project.

On June 1, Google announced that it won’t be renewing its contract with the DoD when it expires. Accompanying that announcement was the news that Google will be updating its code of ethics.

Keep reading this article at: https://www.federaltimes.com/opinions/2018/06/14/how-should-the-tech-industry-handle-high-profile-government-contracts/