You are here: Home / Government Contracting News / Other transaction authority: Protests and disputes

Ready or not — Federal agencies are increasingly utilizing Other Transaction Authority (OTA) to craft agreements that are not subject to traditional procurement laws and therefore should, in theory, allow the Government greater access to innovative solutions. 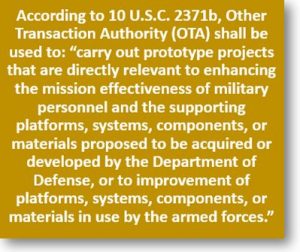 While the goal of OTA procedures may be to avoid bottlenecks inherent in procurement under the Federal Acquisition Regulations (FAR), in the end they may result in valuable contracts with the government. As with any such contracts, it is inevitable that disputes will arise during their formation and administration.

While there is very little precedent relating to protests of OTA awards or claims arising under OTA-awarded contracts, there are some fundamental principles and analogous decisions that suggest how this early history of OTA protests and claims may unfold. This article attempts to portray the current landscape for protests of OTA awards and contract claims arising during performance of an OTA agreement.

But, first, a bit of context.

Executive agencies derive authority to enter into traditional procurement contracts, grants, and cooperative agreements from Congress.  “OTA” is a rubric describing a set of statutes that explicitly grant certain agencies the authority to enter into agreements other than procurement contracts, grants, and cooperative agreements. Over the past roughly 60 years, Congress has granted varying degrees of OTA to various agencies, including NASA and the Department of Defense (DoD).

In theory, freedom from the burdens of traditional procurement laws and procedures should allow agencies to craft creative, customized agreements without the requirements and compliance burdens that can scare groundbreaking commercial companies away from the government contracting market. Of great interest to commercial companies, OTA awards are exempt from the Bayh-Dole Act and its associated patent and data rights regulations, allowing parties to an OTA agreement great flexibility in negotiating protection of intellectual property rights. As innovation is increasingly driven in the commercial sector by companies that are not reliant on federal funding, agencies are turning to OTA in order to attract companies that would not otherwise consider pursuing a traditional procurement opportunity.

Keep reading this article at: http://www.mondaq.com/article.asp?articleid=716090