The federal government is primed to spend as much as $300 billion in the final quarter of fiscal 2018 as agencies rush to obligate money appropriated by Congress before Sept. 30 or return it to the Treasury Department. 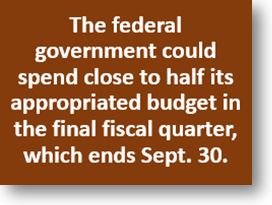 The spending spree is the product of the omnibus budget agreement signed six months late in March coupled with funding increases of $80 billion for defense and $63 billion for civilian agencies. The shortened time frame left procurement officials scrambling to find ways to spend the money.

Through August, defense and civilian agencies obligated some $300 billion in contracts. But to spend all the money appropriated to them by Congress, they may have to obligate well over $200 billion more in the final quarter of fiscal 2018, which ends in two weeks.

Keep reading this article at: https://www.nextgov.com/cio-briefing/2018/09/unprecedented-government-spending-spree-picks-speed/151347/