Last month, the Federal Circuit weighed in on a largely-overlooked provision in the Federal Acquisition Streamlining Act (FASA) that requires federal agencies, to the maximum extent practicable, to procure commercially available goods and services to meet their needs. 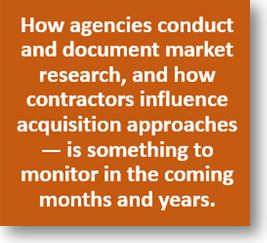 In the case — Palantir USG v. United States — the court affirmed the decision by the Court of Federal Claims (COFC) enjoining the Army from proceeding with its Distributed Common Ground System – Army Increment 2 (DCGS-A2) procurement until it complies with the FASA provision.

DCGS-A2 is not your average solicitation for an IT system.  It is phase two of the Army’s flagship system for processing multi-sensor intelligence — a program that the Army has spent nearly two decades and billions of dollars trying to develop.  For several years prior to the release of the DCGS-A2 solicitation, Palantir — the protester — informed the Army that the company already had a commercial item that Palantir believed fit the Army’s requirements.  Despite Palantir’s communications regarding the capabilities of its product, the Army issued a single-source indefinite-delivery/indefinite-quantity solicitation focused on developing a new intelligence data management system — essentially from scratch.  Palantir protested the solicitation and argued that it violated FASA’s mandate regarding the use of commercial items.

Keep reading this article at: https://www.insidegovernmentcontracts.com/2018/10/federal-circuit-charts-new-terrain-commercial-item-contracting/