You are here: Home / Government Contracting News / Someone is waging a secret war to undermine the Pentagon’s huge cloud contract

As some of the biggest U.S. technology companies have lined up to bid on the $10 billion contract to create a massive Pentagon cloud computing network, the behind-the-scenes war to win it has turned ugly. 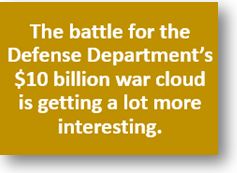 In the past several months, a private investigative firm has been shopping around to Washington reporters a 100-plus-page dossier raising the specter of corruption on the part of senior Defense Department and private company officials in the competition for the JEDI cloud contract. But at least some of the dossier’s conclusions do not stand up to close scrutiny.

The dossier insinuates that a top aide to Defense Secretary Jim Mattis worked with Mattis and others to steer the contracting process to favor Amazon Web Services, or AWS — and enrich the aide. The aim of the dossier seems clear: to prevent the deal from going solely to AWS, the odds-on favorite in part because it operates the CIA’s classified commercial cloud. Far less clear, however, is who backed its creation and distribution.

It’s an unusually hardball form of backroom maneuvering in the world of lucrative but rigidly controlled defense contracting. The firm that prepared the dossier, RosettiStarr, shopped it to various Washington reporters earlier this year. Defense One was given a copy in May. At the time, RossettiStar President and CEO Rich Rosetti declined to reveal who funded the firm’s efforts.

Former defense officials told Defense One they received inquiries about the allegations from the Wall Street Journal, the Washington Post, Reuters, and the Intercept. For months, the accusations went unaired by news outlets, including Defense One and Nextgov, sister publications in Atlantic Media’s Government Executive Media Group.

But in the past few weeks, some of the information in the dossier has surfaced in various publications. Now that the dossier’s targets have been publicly accused, they are speaking out. In exclusive interviews with Defense One and Nextgov, they vehemently deny any wrongdoing and seek to turn the spotlight on their mysterious accusers.

Keep reading this article at: https://www.defenseone.com/technology/2018/08/someone-waging-secret-war-undermine-pentagons-huge-cloud-contract/150685/