You are here: Home / Government Contracting News / What acquisition pros can learn from kids’ soccer

Have you ever seen little kids play soccer? 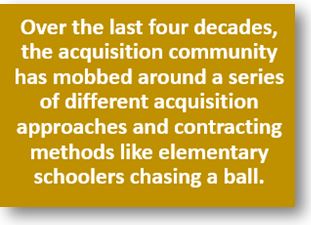 Without fail, all the kids on the field mob the ball as soon as the whistle blows. It’s the only thing they focus on, despite what their coaches told them about playing positions.

If by chance the ball gets kicked free, the child mob moves to another part of the field and again surrounds the ball. This is frustrating for coaches, parents, and players alike, because instead of playing soccer, they’re just playing mob ball.

Eventually, as the kids grow older, they learn to play proper positions and be in the right place at the right time for the needs of the game. They begin to actually play soccer and develop strategy, discipline, and teamwork skills. They improve their game, and it’s a lot more fun for everyone.

But then some of them join the acquisition workforce and start playing acquisition mob ball. Like the soccer version, this is frustrating for everyone.

Keep reading this article at: https://www.defenseone.com/ideas/2019/01/dont-play-mob-ball-what-acquisition-pros-can-learn-kids-soccer/154359