You are here: Home / Government Contracting News / The Pentagon needs to woo artificial intelligence experts away from big tech 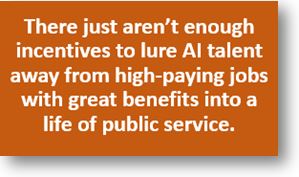 Neither was a first attempt at a national AI strategy. In 2016, the Obama administration published a comprehensive plan on the future of AI, which never had time to gain the momentum it needed in government. The Pentagon has been researching intelligent machines for the better part of 60 years, and only recently did it come to a consensus: Our future wars will be fought in code, using data and algorithms as powerful weapons. Using AI techniques, a military can “win” by destabilizing an economy rather than demolishing countrysides and city centers. From that perspective, and given China’s unified march advancing artificial intelligence, China is dangerously far ahead of the West.

Keep reading this article at: https://www.wired.com/story/the-pentagon-needs-to-woo-ai-experts-away-from-big-tech/