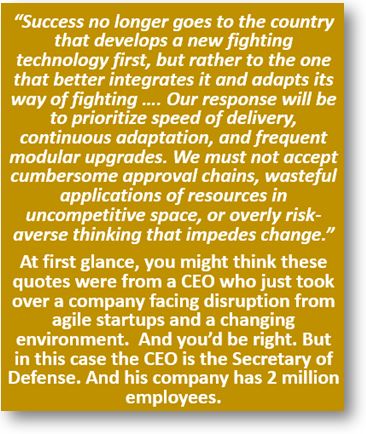 Since 9/11 the U.S. military has focused on defeating non-nation states (ISIL, al-Qaeda, et al.) The new National Defense Strategy states that America needs to prepare for competition between major powers, calling out China and Russia explicitly as adversaries, (with China appearing to be the first.) Mattis said, “Our competitive advantage has eroded in every domain of warfare.”

While the National Defense Strategy recognizes the importance of new technologies, e.g.  autonomous systems and artificial intelligence, the search is no longer for the holy grail of a technology offset strategy. Instead the focus is on global and rapid maneuver capabilities of smaller, dispersed units to “increase agility, speed, and resiliency … and deployment … in order to stand ready to fight and win the next conflict.” The goal is to make the military more “lethal, agile, and resilient.”

The man with a lot of fingerprints on this document is Deputy Secretary of Defense Patrick Shanahan. Shanahan came from Boeing, and his views on innovation make interesting reading.

People in government rarely make the case for taking more risk. Yet Shanahan said after the strategy was released, “Innovation is messy.” He added, “we’re going to have to get comfortable with people making mistakes.”

Keep reading this article at: https://warontherocks.com/2018/02/national-defense-strategy-compelling-call-defense-innovation/