After months of speculation and a standing September deadline, President Donald Trump signed an executive order Wednesday officially moving the federal government’s background and security clearance investigations to the Defense Department and giving the receiving office a new name. 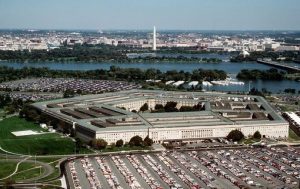 After the 2015 breach of Office of Personnel Management systems that compromised sensitive personal information of more than 21 million current and prospective federal employees and contractors, the Obama administration created a new background investigation office called the National Background Investigation Bureau. But the administration also charged the Defense Department with supporting NBIB by building and managing the underlying IT systems, which would be called the National Background Investigation Service.

Congress later passed language in the 2018 defense authorization bill giving the Defense Department responsibility for meeting its own clearance needs, which make up about 70 percent of all investigations work. The remaining 30 percent of civilian agency clearances would remain with NBIB and OPM.

Rather than split that work up, the Trump administration made moves to migrate all clearance work to the Defense Department under the Defense Security Service. As the early days of planning began, officials took the opportunity to rethink the process, which hadn’t had an overhaul in more than 50 years.