President Donald Trump signed a pair of executive orders last week that the White House said were meant to curtail what it views as “abuses” of American citizens by federal agencies. 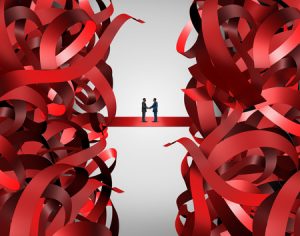 The orders deal with what the administration said is a federal bureaucracy that is “running roughshod” over individuals’ and companies’ legal and constitutional rights: they demand that agencies increase transparency in their regulatory and enforcement processes and reduce what the White House said is an overreliance on informal rulemaking.

Both executive orders address the Administrative Procedure Act. The administration said agencies too often use informal guidance as a work-around to the notice and comment processes the APA demands. So going forward, agencies will have to treat all guidance documents they issue, or have published before, as non-legally-binding.

Until now, the White House said, agencies have sometimes used guidance as a stand-in for formal regulations.

Keep reading this article at: https://federalnewsnetwork.com/agency-oversight/2019/10/trump-administration-issues-orders-to-combat-bureaucratic-abuse-by-rogue-agencies/