Not being included, or being purposely excluded, may remind some of adolescence, and may remind others of the Federal Acquisition Regulation (FAR) simplified acquisition procedures. 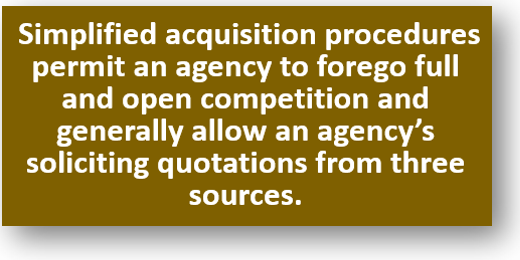 The underlying purchase order in this matter was issued by the Department of the Interior, Fish and Wildlife Service, to address the Southeast Idaho National Wildlife Refuge Complex’s (NWRC’s) urgent need for herbicide.  The Southeast Idaho NWRC’s need was compounded by an unplanned wildfire, which provided soil conditions that would facilitate the elimination of “cheatgrass,” an invasive species in the area. The Southeast Idaho NWRC expressed its need for fifteen gallons of herbicide to the agency on October 10, 2019, stating that it needed the herbicide by October 25 because of concerns that a freezing event would occur and eliminate the efficacy of the herbicide.

To respond to the pressing request, the agency solicited quotations as a small business set-aside pursuant to FAR §§ 13.003 and 13.104, which provide for simplified acquisition procedures in lieu of full and open competition. The agency solicited quotations from three vendors – one was a local vendor and the other two vendors were businesses that had submitted the lowest prices in response to a prior solicitation for herbicides. Phoenix had also submitted a bid for this prior solicitation, though it had quoted the second highest price. While Phoenix had, throughout the years, repeatedly notified the agency that it was interested in all of the agency’s herbicide requirements, the agency did not solicit a quotation from Phoenix.

The formal purchase order was issued to Wilbur-Ellis Co. on October 17 and on October 18 the Southeast Idaho NWRC picked up the herbicide from the vendor’s facilities. On October 22, Phoenix requested that the contracting officer cancel the award, and after being informed that such would not occur, on October 25, Phoenix filed a protest at the agency level. Following the denial of that protest, Phoenix filed the instant protest with the GAO.

Keep reading this article at: https://www.jdsupra.com/legalnews/simplified-acquisition-procedures-93132/

A helpful explanation of what simplified acquisition is appears at: http://contractingacademy.gatech.edu/?p=2851