You know a transformation is afoot when the Navy chooses as its acquisition chief a man known as “Hondo,” who is famous for an Iron Man exoskeleton project and a “Thunderdrone” UAV tournament. 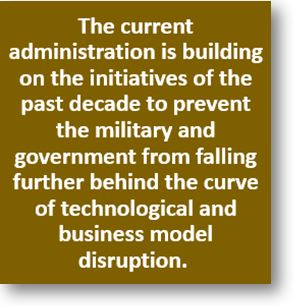 Assistant Secretary of the Navy for Research, Development and Acquisition James “Hondo” Geurts is the father of SOFWERX, the U.S. Special Forces Command’s technology incubator, where the super suit and the drone coliseum are housed. SOFWERX is dedicated to fomenting creative collisions among divergent thinkers, and Geurts is the personification of the most expansive explosion of innovative in federal acquisition in a quarter century.

As Geurts often says, we are in the Age of Surprise. Timelines are shorter. The technology gap between the United States and its adversaries is disappearing.

Keep reading this article at: http://www.govexec.com/excellence/promising-practices/2018/03/riding-acquisition-innovation-avalanche/146745/

To you — our students, our clients, and visitors — we say thank you!

We monitor visits to our web site to determine what interests our readers.  Some of the most popular web content was read hundreds and hundreds of times!  Just in case you missed something important last year, listed below are the top 15 most popular news stories, with each one hyper-linked to the full article.

What were the most popular topics viewed on The Academy’s web site during 2017?  They are listed below, each hyper-linked to corresponding resources:

Worldwide Interest in the Contracting Academy

While 86 percent of visitors to The Academy’s web site are based in all 50 of the United States, our analysis shows that personnel on U.S. military bases around the world — as well as contracting officials from federal agencies such as USAID, CDC and the State Department — are among the many international visitors to our site.

A Pair of New Year’s Resolutions

What do we recommend to you for the New Year?  Two things:

A former procurement officer employed at Sandia Corporation, the prime operator of a federally funded nuclear research and development facility, pleaded guilty Dec. 5th to charges of wire fraud and money laundering for orchestrating a scheme to obtain approximately $2.3 million in federal funds through fraudulent means and for laundering fraudulently obtained proceeds through her father’s companies.

Carla Sena, 55, of Santa Rosa, New Mexico, pleaded guilty to one count of wire fraud and one count of money laundering in the U.S. District Court of New Mexico.  Sentencing will be scheduled at a later date.

According to the plea documents, Sena’s employer, Sandia Corporation, managed and operated Sandia National Laboratories (SNL), a nuclear research and development facility owned by the federal government under sponsorship of the U.S. Department of Energy (DOE).

The DOE Office of Inspector General investigated the case.

A federal grand jury sitting in the District of New Mexico returned an 11-count indictment against a former procurement officer employed at Sandia National Laboratories (SNL), a nuclear research and development facility of the U.S. Department of Energy (DOE), for orchestrating a scheme to obtain a $2.3 million contract through fraudulent means.

Carla Sena, 55, of Albuquerque, New Mexico was charged with three counts of wire fraud, one count of major fraud against the United States and seven counts of money laundering.

According to the indictment, SNL was managed and operated by Sandia Corporation (Sandia) during the relevant time period.  In late 2010, Sena was assigned by Sandia to manage the bidding process for the award of a contract for moving services at SNL.  In anticipation thereof, Sena created New Mexico Express Movers LLC (Movers LLC), prepared a bid on Movers LLC’s behalf, and submitted the bid to Sandia under someone else’s name to conceal her involvement.  Sena made several material and fraudulent misrepresentations in Movers LLC’s bid that would have resulted in disqualification, but she used her position at SNL to ensure that these misrepresentations went undetected.  Sena also used her position to access other bidders’ documents and information that she in turn leveraged to ensure award of the contract to Movers LLC.  As a direct result of Sena’s scheme to defraud, Movers LLC received approximately $2.3 million in DOE funds.  The indictment further alleges that, between December 2011 and April 2015, Sena transferred via negotiated checks at least $643,000 of these fraudulently obtained proceeds to legitimate businesses owned by her father with the intent to conceal her subsequent use of the proceeds for personal gain.

The indictment is the result of an ongoing investigation by the DOE Office of Inspector General and is being prosecuted by the Criminal Division’s Public Integrity Section.

The fact that a defendant has been charged with a crime is merely an accusation, and the defendant is presumed innocent unless proven guilty.

Buried in the $700 billion fiscal 2018 National Defense Authorization bill that House-Senate conferees unveiled on Wednesday is a compromise on disputed language aimed at reducing the number of time-consuming contractor bid protests.

Contractors, contracting officers and staff of the Government Accountability Office — which adjudicates the protests filed by companies that lose out on an award — had been awaiting the fate of language in the Senate version that would have required companies larger than $100 million in the previous year’s revenues that protest unsuccessfully to pay the costs of processing the protest at Defense and GAO.

Too many “frivolous” protests cause delays in the procurement of weapons systems, the unnamed senators argued.

Keep reading this article at: http://www.govexec.com/defense/2017/11/defense-authorization-bill-allows-pilot-program-curbing-bid-protests/142445