You are here: Home / Archives for affirmative action

This follows action by the U.S. Department of Labor (DOL) which announced plans to assist those affected by the California wildfires. The DOL’s actions include relief efforts by a number of agencies.

In a national interest exemption memorandum to all contracting agencies of the federal government, OFCCP Acting Director Craig Leen cited the “special circumstances in the national interest presented by the destruction caused by California Wildfires” as the reason behind the institution of a limited exemption and waiver from some of the requirements of the laws administered by OFCCP.

The memorandum applies to new supply and service and construction contracts entered into between November 19, 2018, and February 19, 2019, specifically to provide California wildfire relief.

Keep reading this article at: https://www.natlawreview.com/article/ofccp-eases-requirements-contracts-to-provide-california-wildfire-relief 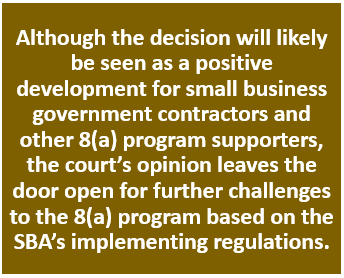 The goal of the SBA’s 8(a) program is to expand government contracting opportunities to small business owners. Under the Small Business Act, the SBA enters into contracts with other federal agencies, which the SBA then subcontracts to eligible small businesses to compete for subcontracts in a sheltered market.  Businesses owned by “socially and economically disadvantaged” individuals are eligible to participate in the 8(a) program.

Per the statute, socially disadvantaged individuals are those “who have been subjected to racial or ethnic prejudice or cultural bias because of their identity as a member of a group without regard to their individual qualities.”

Keep reading this article at: https://www.insidegovernmentcontracts.com/2016/09/d-c-circuit-upholds-constitutionality-sbas-8a-program/

On September 9, 2016, a federal appeals court upheld a Small Business Administration program that gives advantages to people who have suffered racial discrimination, reasoning that the law as written doesn’t discriminate on the basis of race, because anyone can be the target of racial bias. The decision, which is based on paper-thin legal logic, is an attempt to keep remediation-based affirmative action from disappearing altogether. It may be too little, too late.

The program, known as 8(a) after the section of the Small Business Act in which it appears, gives a preference in government contracting to small businesses owned by “socially and economically disadvantaged” individuals. The law defines the socially disadvantaged as people “who have been subjected to racial or ethnic prejudice or cultural bias because of their identity as a member of a group without regard to their individual qualities.”

If this sounds like race-based affirmative action, that’s because it is. The SBA regulations implementing the law create a presumption that any member of racial minority has been subject to bias. Unless the presumption is overcome by evidence that the business owner hasn’t suffered discrimination — a pretty unlikely scenario — the program functions to give minority business owners an advantage.

Back in the day, the racial preference wouldn’t have been a legal problem. The original theory of affirmative action was precisely to remedy past discrimination by giving an advantage to those who had suffered its effects, namely racial minorities.

Keep reading this article at: https://www.bloomberg.com/view/articles/2016-09-13/the-thin-legal-case-for-affirmative-action-in-contracting