You are here: Home / Archives for Alaskan Native 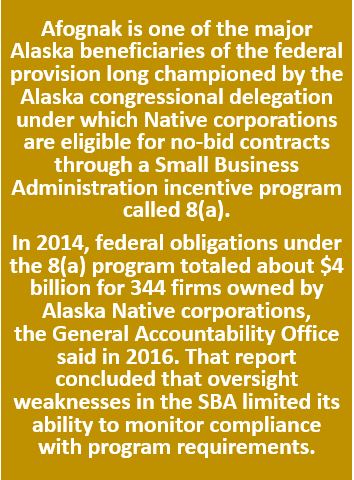 Alaskan Congressman Don Young is enlisting a bipartisan group in the House of Representatives to urge Secretary of Defense Ash Carter to swiftly and diligently complete a Department of Defense (DOD) study examining the negative impacts of Section 811 of the Fiscal Year 2010 National Defense Authorization Act (NDAA) on Native community owned contractors.

“The 8(a) program has been extremely successful in creating an efficient and cost effective contracting option for the government while supporting economic opportunity for some of the most disadvantaged and underemployed populations in the nation,” said Congressman Young. “Since Senator Stevens left the Senate, Native contractors have been under constant attack. Section 811 was snuck into the 2010 NDAA negotiations by the Senate, and ever since then I have repeatedly heard about the confusion, difficulty and damage this Act has caused to our Native contractors.”

Section 811 requires that any 8(a) Native American sole-source contract, in excess of $20 million, go through an overly burdensome approval process. While the measure was sold as a “good governance” provision and did not prohibit or discourage the awarding of such contracts, this heightened scrutiny, not required for any other contractors, has had a chilling effect for contracts.

Keep reading this article at: http://alaska-native-news.com/young-pushes-for-analysis-on-negative-impacts-of-section-811-on-native-owned-contractors-16415

The memo — dated Jan. 10, 2013 — points to the threat of sequestration and the continued use of a continuing resolution as a way to fund the department. Sequestration was to have become effective Jan. 2, but Congress delayed its activation until March 1 to give lawmakers more time to come up with an alternative. It would impose major across-the-board spending cuts.

Given this budgetary uncertainty, the department must take steps now, the deputy secretary said.

“I therefore authorize all Defense components to begin implementing measures that will help mitigate execution risks,” the memo reads. “For now, and to the extent possible, any actions taken must be reversible at a later date in the event that Congress acts to remove the risks. … The actions should be structured to minimize harmful effects on our people and on operations and unit readiness.”

The memo allows components to review contracts and studies for possible cost savings, to cancel third- and fourth-quarter ship maintenance, and to examine ground and aviation depot-level maintenance. This last must be finished by Feb. 15.

It also calls on all research and development and production and contract modifications that obligate more than $500 million to be cleared with the undersecretary of defense for acquisition, technology and logistics before being awarded.

For science and technology accounts, the components must provide the undersecretary and the assistant secretary of defense for research and engineering with an assessment of the budgetary impacts that the budgetary uncertainty will cause to research priorities.

Work on a botched program to develop software for the Defense Medical Examination Review Board was performed by an Alaska native company, said Steven Davis, a spokesman for the Space and Naval Warfare Systems Command. The command’s Atlantic center contracted with software engineering firm Barling Bay LLC to support development of a medical records system that has come under fire for failing so severely that responsibility for the work was transferred to the General Services Administration.

Sen. Claire McCaskill, D-Mo., chairwoman of the contracting oversight panel for the Homeland Security and Governmental Affairs Committee, charged in a Dec. 7 letter to Chief of Naval Operations Adm. Jonathan Greenert that SPAWAR’s management of the contract for service academy exams was “so inadequate that the General Services Administration had to assume responsibility.” The review board determines the medical qualification of more than 50,000 applicants annually for appointment to a U.S. service academy, the Uniformed Services University of the Health Sciences and the Reserve Officer Training Corps.

Keep reading this article at: http://www.nextgov.com/health/2012/12/alaska-native-firm-played-role-failed-medical-review-board-software-project/60280/?oref=govexec_today_nl

Auditors reviewed 72 sole-source contracts worth $20 million or more in the 8(a) program designed to benefit Alaska native corporations since 2009. Under a change in the Federal Acquisition Regulation mandated by the fiscal 2010 National Defense Authorization Act, agencies are required to spell out their justification for not awarding the work to competing contractors.

Contracting preferences for Alaska native corporations have led to cases of fraud perpetrated by front companies.

Keep reading this article at: http://www.govexec.com/contracting/2012/12/sba-misapplying-policy-sole-source-contracts-gao-says/60153/?oref=govexec_today_nl.