You are here: Home / Archives for commercial item 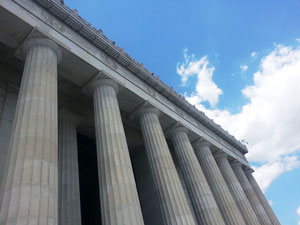 Senior Procurement Executive Jeffrey Koses signed a “memorandum raising thresholds for areas included in the Irma declaration response,” a GSA spokeswoman told Government Executive. The Irma memorandum follows an Aug. 29 directive issued in anticipation of rebuilding in the aftermath of the Houston-area flooding from Harvey.

The Harvey memo cited sections of the Federal Acquisition Regulation allowing GSA to raise the micropurchase threshold to $20,000 for any contract to be awarded and performed, or purchase to be made in support of the designated disaster areas. “The simplified acquisition threshold is increased to $750,000, or $13,000,000 for commercial items,” the memo to GSA contracting professionals said. The authority extends to any necessary leasing of property.

Keep reading this article at: http://www.govexec.com/contracting/2017/09/gsa-relaxes-rules-speed-contracting-hurricane-relief-efforts/140856/

Pentagon officials, at the urging of Congress and successive administrations, has been trying for years to operate more like a business to cut costs and operate more efficiently. They have little to show for those efforts, an analysis by Bloomberg Government shows.

Shortly after Donald Trump was elected president, the Defense Business Board, which advises the Pentagon on management from a private-sector perspective, urged that the Department of Defense be run “like a modern business.”

However, getting the military’s massive bureaucracy to behave more like a corporation is harder than it looks, according to a report from the Government Accountability Office.

Keep reading this article at: https://about.bgov.com/blog/pentagon-run-like-business-trying-years/ 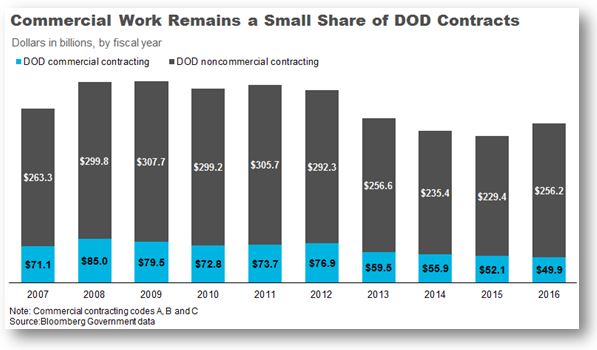 The Defense Department could be the next big player in commercial, online marketplace commerce if the new acquisition reforms proposed by House Armed Services Committee Chairman Mac Thornberry (R-Texas) make it into law.

Thornberry released his third annual acquisition reform bill to the public today. This year he takes aim at DoD’s ability to buy commercial products, contract audits and services acquisition with an 80-page bill that will eventually be folded into the 2018 defense authorization bill.

The bill tries to encourage DoD to buy commercial off the shelf products through e-commerce marketplaces. Think something like Amazon, where the marketplace aggregates products from multiple vendors.

DoD already uses a system like that called DoD EMALL, but that is an area where vendors only sell to the government.

Keep reading this article at: https://federalnewsradio.com/defense-news/2017/05/thornberry-takes-aim-at-commercial-items-contract-audits-and-services-contracts/

If the Trump administration wants to seriously reduce the regulatory burden on agencies and vendors, it should look no further than the Federal Acquisition Regulations and the Defense FAR (DFARs).

Since 2009, the number of clauses around commercial items skyrocketed from 16 to 142,  according to a preliminary analysis by the Aerospace Industries Association (AIA).

Of the 114 new clauses, 40 came from Congress through legislation and 76 from the White House or the government’s acquisition oversight councils, in the form of executive orders or FAR/DFARs cases.

And of all of those clauses, most —109 — impact every vendor, not just military contractors, while 33 only are in the DFARs.

Keep reading this article at: https://federalnewsradio.com/reporters-notebook-jason-miller/2017/05/114-new-commercial-buying-regs-since-2009-highlights-why-federal-procurement-needs-fixing/