You are here: Home / Archives for competence

The government’s civilian acquisition workforce, long under pressure to improve hiring and modernize its skill sets, is feeling more satisfied with its own effectiveness, according to the latest biennial Acquisition Workforce Competency Survey released last week.

Considered the most comprehensive version of the survey yet (an 83 percent increase in response rates across agencies), it showed that the buyers rated themselves highest for issuing contract order changes and modifications, awarding contracts and competition. Also rated highly were inspection and acceptance and business acumen, said the results analyzed by a partnership between the White House Office of Federal Procurement Policy and the Federal Acquisition Institute.

Keep reading this article at: https://www.govexec.com/contracting/2018/08/federal-acquisition-workers-rate-themselves-highly-most-skills/150611

A key challenge to improving acquisition is defining what good contracting really is — and the proper skill sets necessary for those working within it.

There are many different views on this topic that show up in various legislation, course curricula, job descriptions, and a variety of professional certifications across public- and private-sector agencies, firms, and associations. These include large government contractors; Defense Acquisition University; Federal Acquisition Institute; colleges and universities with supply chain, contract management, and business programs; corporate training criteria; and all manner of nonprofit standards and certifications. Unlike many other professions, there is no universally agreed upon “Good Housekeeping Seal of Approval” that gives those working in or contemplating entry into contracting a universally adopted set of competencies for today’s acquisition manager. Instead, “good contracting” and its skill sets are defined (if at all) piecemeal, employer by employer, segmented by type and size of organization.

However, there are models in use today that could be a starting point. For example, the Volcker Alliance recently published a list of fundamental skills and experience required for those responsible for public procurement, based on interviews with procurement officials and academic experts, leveraging their expertise to develop a competency model and evaluate the current public procurement workforce against those competencies.

Keep reading this article at: http://www.wifcon.com/discussion/index.php?/blogs/entry/3193-effective-competencies-in-contracting/

Every year, thousands of professionals at all levels of government in the United States execute contracts to buy $2 trillion in public goods and services, ranging from fighter jets to professional services to office supplies. 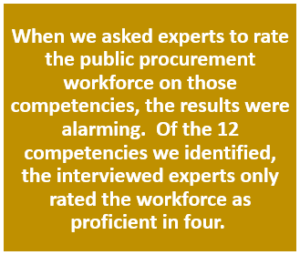 Their work is crucial, yet too often we learn that the public procurement system is at the heart of government breakdowns such as the launch of Healthcare.gov or cost overruns in the development of the F-22 fighter. These headlines lead to grandstanding and finger-pointing, but fail to offer a clear sense of what skills those professionals need to effectively manage taxpayer dollars, and where progress is most needed.

That’s why the Volcker Alliance — launched by Paul A. Volcker to address the challenge of effective execution of public policies and to help rebuild public trust in government — teamed with Censeo Consulting Group and Public Spend Forum to conduct a study to develop a draft competency framework laying out the core skills of an effective procurement workforce.

Keep reading this article at: http://www.govexec.com/excellence/promising-practices/2016/07/government-buys-2-trillion-worth-stuff-every-year-here-are-5-ways-do-it-better/129865/

Many issues influence the ability of the federal acquisition workforce’s to get its job done, according to a survey recently released by the Professional Services Council and Grant Thornton. 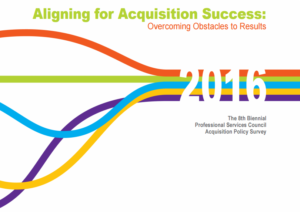 In the annual Acquisition Policy Survey conducted by the two organizations, the development of the government’s acquisition workforce “showed mixed results.”  The 80 persons who were surveyed reported positive trends in workforce capability, but they identified the persistence of lingering weaknesses in critical skill sets. “Workforce development and the ability to hire the right talent are key challenges,” the report states. “More than a competency gap, this year’s interviewees expressed concern about a capacity gap, wherein the existing workforce, however skilled it may be, simply does not have the time and resources to keep up with demand.”

The significance of budget, communication, innovation and oversight are also reported on in the study.  Here are a few excerpts:

Acquisition personnel at the Defense Department from management on down don’t have the knowledge or incentives to do their jobs well, said Dov Zakheim, the  department’s former comptroller, on Oct. 29.

The era where DoD technology was far more advanced than the private sector  has passed, he said, with Silicon Valley and other technology centers holding  their own. But DoD doesn’t ensure that its acquisition workforce remains  conversant with the latest advances, Zakheim said during a House Armed Services  Committee hearing.

“Too many program managers appear to be deficient when it comes to  supervising the progress of programs simply because they don’t know the  technology that they’re supervising,” he said. Some have to depend on contractors to help them understand the technologies they oversee.

Zakheim was DoD’s comptroller and chief financial officer during the George  W. Bush administration. He was also a high-ranking DoD official in the Reagan Administration.

Also out of date, he said, are the policies for promotion within an agency,  as many employees move up the chain because of their years of service rather  than as a reward for good work. Zakheim proposed that DoD include cost savings  that acquisition officers have achieved as a factor in promotions, to alter their incentives.

Keep reading this article at: http://www.fiercegovernment.com/story/ex-pentagon-official-acquisition-failures-tied-personnel-issues/2013-10-30

A webcast and prepared testimonies are available on the hearing webpage at http://armedservices.house.gov/index.cfm/hearings-display?ContentRecord_id=df2275cc-a8dd-40dc-878f-ed7afc2cdacd