You are here: Home / Archives for contract services

Despite sweeping legislative and department changes over the past five years, progress on the Defense Department’s systems acquisition and contracting management remain basically stagnant on the Government Accountability Office’s 2019 High-Risk List of areas that are most vulnerable to waste, fraud and abuse.

The list, released last Wednesday, states efforts to shore up problems with DoD weapons systems acquisition remain “unchanged” since GAO’s last high-risk list in 2017. GAO made the same assessment of the Pentagon’s contract management issues, though with a few positive caveats.

The two items on the high-risk list account for almost $2 trillion in taxpayer funds — about $1.66 trillion in investments of 86 major weapons systems and $300 billion in annual contracted services for the Pentagon. Both of the items have been on GAO’s high-risk list since the early 1990s.

At the same time, GAO points out that the government’s inability to address climate change is causing national security issues and will cost DoD more money.

Keep reading this article at: https://federalnewsnetwork.com/defense-main/2019/03/dods-acquisition-and-contracting-sees-little-improvement-on-gao-high-risk-list/

The American Federation of Government Employees is asking Congress to step in and require the Defense Department to “improve the oversight and management for the vast sums it spends so carelessly on contracted services,” its president said in a late-April letter to congressional chairmen. 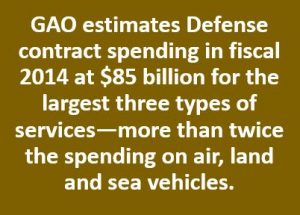 “Anything less is handing a blank check to the Pentagon to waste [money] on contracted services,” wrote national president J. David Cox in a letter urging that Congress require implementation of Government Accountability Office (GAO) recommendations that would establish more detailed long-term projections in spending on such services as information technology, research and development, and facilities maintenance.

“This action is needed to ensure that funds are properly allocated to the readiness and recapitalization priorities of the Department of Defense and not diverted to headquarters contracts,” Cox said.

Keep reading this article at: http://www.govexec.com/contracting/2017/05/union-urges-congress-make-pentagon-quantify-services-contracting/137594/