You are here: Home / Archives for cyber attacks

The Pentagon is warning defense-industry CEOs to better protect their computer networks or risk losing business.

“The culture we need to get to is that we’re going to defend ourselves and that … we want the bar to be so high that it becomes a condition of doing business,” Deputy Defense Secretary Patrick Shanahan said last week at an industry conference here sponsored by the AFCEA and the U.S.Naval Institute.

Shanahan noted that CEOs would likely be hesitant to “sign a cyber disclosure statement that says everybody you do business with is secure.”

“In areas of safety, protecting your workers, in terms of protecting our data or protecting their information, there should be this standard,” he said after the speech.

Keep reading this article at: http://www.defenseone.com/business/2018/02/pentagon-warns-ceos-protect-your-data-or-lose-our-contracts/145779

A partner organization at Georgia Tech has resources and solutions to help contractors comply with DoD’s cybersecurity requirements.  Find them here: http://gtpac.org/cybersecurity-training-video/

The Department of Defense (“DoD”) has issued two Class Deviations that provide defense agencies with greater flexibility when procuring in times of crisis. 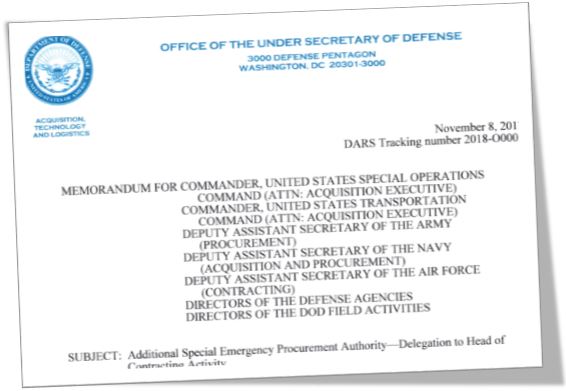 These Class Deviations allow for the use of simplified acquisition procedures and excuse certain procurement obligations when DoD is responding to a cyber-attack or providing relief in support of domestic or international disasters.

On November 8, 2017, DoD issued Class Deviation 2018-O0001, which expands the types of procurements treated as commercial item acquisitions and exempts acquisitions in support of cyber-attacks, international disaster assistance, and “emergency or major disaster” relief from requirements to (i) comply with item unique identification, (ii) receive two offers, and (iii) limit the use of time and materials contracts. This Class Deviation also delegates authority for determinations relating to these acquisitions from the Secretary of Defense to the various heads of contracting activities within DoD.

Keep reading this article at: https://www.insidegovernmentcontracts.com/2017/11/dod-allows-for-more-contracting-flexibility-in-times-of-crisis/

Is the ability to identify a cyber attacker good and getting better?

At the Georgia Institute of Technology on Wednesday, Stewart A. Baker, the first assistant secretary for policy at the U.S. Department of Homeland Security, proposed that 2017 might just be a transformational moment in the quest for better cyber attribution.

“We are entering a golden age of attribution where perpetrators are increasingly being called out with reasonable certainty; but while the brave have gotten a lot of press out of it, will they regret their business approach and are their methods good enough and specific enough to be useful?” said Baker, who delivered the keynote address at the 15th Annual Georgia Tech Cyber Security Summit held Sept. 27.  Today, he is a partner in Steptoe & Johnson LLP.

Baker reviewed four problems with attribution now: the balkanization of security, limited incentives to do attribution, speed of response, and availability of tools. He called for “data man traps” and cyber “beacon die-packs” like those used by banks that could make it easier for law enforcement or intelligence communities to locate cyber hackers.

Organizations are beginning to publicly voice who they suspect is behind highly publicized breaches. Sony Pictures identified North Korea as their culprit. The Democratic National Committee identified Russia. Meanwhile, universities such as Georgia Tech are working closely with government sponsors and commercial partners to develop an initial science of traceback around how attribution should be performed.

“Georgia Tech is building frameworks for attribution so that others can leverage our approach by applying their own data and analyzing the result,” said Michael Farrell, Co-Director of the Institute for Information Security & Privacy (IISP) and organizer of the Summit.

But once analyzed, key questions still remain, even when methods are sound.  What is the right response when facing a nation-state hacker versus the individual criminal?  What does it mean to hold nation states and companies responsible?  How should the private sector use attribution information to better defend themselves and mitigate risk? What if government is wrong when it claims who is behind an attack?

“We have to start with the assumption that cybersecurity is not something the public entirely has their head around,” said Hannah Kuchler, journalist for the Financial Times, who participated on a panel at the Summit moderated by Baker. “When government agencies offer conflicting opinions, it is confusing for the public.”

“There is a dissatisfaction in Washington, D.C., with the deterrence toolbox right now,” said Robert Knake, senior fellow at the Council on Foreign Relations and also a panelist at the Summit. “A basic problem here is contagion. [Hack back tools] can reach targets they weren’t intended for. To ban certain targets as off limits [during a counterattack], you’d also have to ban certain types of attacks. I’m not sure that will work.”

In addition to Kuchler and Knake, the panel included Kim Zetter, investigative journalist and author of a 2014 book about the Stuxnet virus; Cristin Goodwin, assistant general counsel for Microsoft Corp.’s security business, and Chad Hunt of the FBI’s Atlanta office.

“What are the private actions that are available to companies?” asked Goodwin. “There are different standards of evidence when talking about attribution of individuals or groups of actors.

“What’s so frustrating about attribution right now is that governments are still wrestling with what does cyberwarfare mean,” she said. “What are the rights of states? What are the private actions that are available to companies?… Our core value at Microsoft is how do we increase the cost of an attack to make it less valuable [for the perpetrator]?”

Hunt said he finds most companies don’t actually care who is behind an attack; they “want to know what resources they’re up against” and if their technical investments are enough.

Zetter, who has covered cyberwarfare and hacking since 1999, challenged whether governments should rely on private companies for attribution assistance.

“When you have the government relying on third-party companies for evidence, I think we’re getting into really muddy ground,” she said.

The choices available to executives, law enforcement, front-line cybersecurity practitioners, and diplomats present unique facets to the problem of “what to do next” after a breach, said Farrell.

“Right now, we lack a deterrence mindset in cyberspace,” he said. “We can’t just dust off the Cold War playbook from 50 years ago and assume it applies.  Attribution is a key component to dealing with malicious cyber activity that is increasing in severity and volume.  Georgia Tech research is working to change that and help inform decision-makers so they can be proactive in mitigating information risk.”

As the new year approaches, everyone tends to reflect on where they are and where they’re going.

This year certainly didn’t go as many had planned — particularly concerning the 2016 elections. For acquisition, this means, like much else, everything is turned on its head.

In the short term, preexisting initiatives and policy from the past administration will continue, under the able stewardship of professional senior executives. It must be stressed, however, that there is scant evidence of what may change with the new administration. There is much conjecture, but no one really knows.

What will be the new administration’s acquisition priorities? Speculation opaquely says increased outsourcing of government activity, but what does that mean?

Keep reading this article at: http://www.federaltimes.com/articles/top-issues-going-into-the-new-year

The Georgia Institute of Technology has been awarded a $17.3 million cyber security research contract to help establish new science around the ability to quickly, objectively and positively identify the virtual actors responsible for cyberattacks, a technique known as “attribution.” 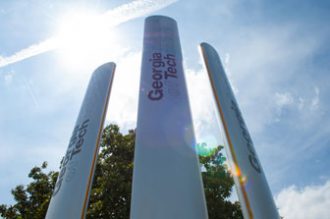 While the tools and techniques to be developed during the four-and-a-half year effort won’t point directly to the individuals responsible, the initiative will provide proof of involvement by specific groups, identifiable by their methods of attack, consistent errors and other unique characteristics. Such attribution could support potential sanctions and policy decisions – and discourage attacks by providing transparency for activities that are normally hidden.

The research, sponsored by the U.S. Department of Defense, will be led by researchers at the Georgia Institute of Technology, in collaboration with other academic institutions and companies. The project is expected to create an attribution framework dubbed Rhamnousia – in Greek mythology, the goddess of Rhamnous and the spirit of divine retribution.

“We should know who our friends are and who our enemies are in the cyber domain,” said Manos Antonakakis, an assistant professor in Georgia Tech’s School of Electrical and Computer Engineering and the project’s principal investigator. “We owe it to the people of this country to objectively reason about the actors attacking systems, stealing intellectual property and tampering with our data. We want to take away the potential deniability that these attack groups now have.”

Attributing attacks to specific groups or individuals could be partially achieved today, but it is largely a manual process that requires highly skilled investigators and weeks or months to complete. Rhamnousia will accelerate that process and provide both scientific reasoning and hard evidence about the guilty parties.

“We have a limited number of people working in cybersecurity and attacks occur every day, so we need to be able to optimize the forensic analysis that would lead to attribution,” Antonakakis said. “In this project, we will use machine learning and algorithms to scale up the attribution process to help companies and the government protect against those bad actors. We will provide a systematic and scientific way to deal with the attacks.”

Michael Farrell, chief scientist of the Cyber Technology and Information Security Laboratory at the Georgia Tech Research Institute (GTRI), is familiar with the issues the U.S. government faces due to an inability to identify those who are attacking U.S. interests in cyberspace. “Deterrence is virtually impossible if you’re unable to identify the adversary,” he noted. “Attribution is the linchpin for deterrence in cyberspace, and the U.S. government is in need of a repeatable and releasable way forward.”

Farrell also serves as the associate director of the Institute for Information Security & Privacy (IISP), and coordinates Georgia Tech’s broad interests in attribution across campus. “There is a policy and strategy component to attribution that is deeply intertwined with the technical solution,” he added. “Georgia Tech is well positioned to engage the broad spectrum of constituents who have an important role to play in this space: industry, academia, government, technology, policy, practitioners and decision-makers.”

The new research effort will use data science and engineering techniques to sift through existing and new data sets to find relevant information.

“Using a variety of data sets and analytical techniques, we can distill the information that will be useful to identifying the virtual cyber actors,” Antonakakis said. “These bad actors have to use the network and computer systems, and they have to interact with sources. They are leaving crumbs behind, and we can leverage those.”

Rapid identification is important to companies and government organizations because the motives of the intruders suggest the kind of information they are seeking, the damage they can do and what the victims may use to stop the attack and minimize impacts.

From a technology standpoint, the project’s goals include development of three specific areas:

Georgia Tech researchers have been involved in attribution research in support of cybersecurity efforts for many years. Researchers helped organize the Mariposa Working Group that helped identify the organizers of the Mariposa botnet.

“Historically, attribution has been done primarily for law enforcement so they could put people behind bars and use that as a deterrent for others who might engage in these activities,” said Antonakakis. “We want to make sure that the people doing these attacks know that there is a very good chance that they will get caught and publicly attributed.”

The Institute for Information Security & Privacy (IISP) at Georgia Tech connects government, industry, and academia to solve the grand challenges of cybersecurity. As a coordinating body for nine information security labs dedicated to academic and solution-oriented applied research, the IISP leverages intellectual capital from across Georgia Tech and its external partners to address vital solutions for national security, economic continuity and individual safety.