You are here: Home / Archives for DATA Act

The Defense Department’s $700 billion budget dwarfs that of other federal agencies. Nonetheless, it hasn’t managed to find sufficient resources to accurately report how it spends all its funds. 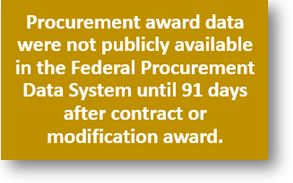 The department falls well short of requirements under the 2014 Digital Accountability and Transparency Act to show where its money goes.

Additionally, the department “did not implement and use the governmentwide award data elements established” by the Office of Management and Budget and the Treasury Department.

Keep reading this article at: http://www.govexec.com/defense/2017/11/pentagons-spending-data-doesnt-add/142473

The first details of the impact that the three-year-old Data Accountability and Transparency (DATA) Act is having on agencies emerged two weeks ago.

The Government Accountability Office released its first mandated report on data quality and use. GAO found an expected mixed bag of success and struggles when it comes to standardizing and reporting procurement and grants data.

“In the three years since enactment, the Office of Management and Budget, Treasury and federal agencies have made significant strides to address many of the policy and technical challenges presented by the act’s requirements, including standardizing data elements across the federal government, linking data contained in agencies’ financial and award systems, and expanding the type of data reported,” GAO states in its report. “However, our audit of the initial data submitted by agencies and made available to the public on Treasury’s Beta.USAspending.gov website shows that much more needs to be done if the DATA Act’s promise of improving the accuracy and transparency of federal spending data is to be fully realized.”

Auditors say agencies continue to struggle with inconsistencies in their data on acquisition awards, reporting incomplete information and ensuring the data meets the need of the end users.

Keep reading this article at: https://federalnewsradio.com/agency-oversight/2017/11/no-surprise-agencies-taking-small-slow-steps-to-improve-reporting-of-spending-data/

Three years after the Digital Accountability and Transparency Act was signed, federal agencies are uploading their financial data to USASpending.gov, an effort to make government operations more transparent to the public.

A beta version of the site, where some of that data is currently accessible, was launched Tuesday by the Treasury Department and Amazon Web Services. Treasury, along with the Office of Management and Budget, is tasked with implementing the DATA Act.

Agencies are still racing to meet the May 9 deadline. Most appear to have reported some data, even if only partially, according to Treasury’s data directory. But missed deadlines and imperfect compliance won’t be a surprise: watchdog reports suggested as much.

For instance, several inspector general audits conducted last year concluded at least three wouldn’t meet the deadline, and another dozen hadn’t said if they would or would not. The Government Accountability Office also concluded OMB and Treasury aren’t using agencies’ internal audits to help gauge their financial transparency audits.

Keep reading this article at: http://m.nextgov.com/big-data/2017/05/federal-spending-data-due-anyone-making-deadline/137702

If federal agencies don’t make their spending data public in the next several days, they will miss a critical milestone outlined in the 2014 Digital Accountability and Transparency Act.

The DATA Act requires agencies to provide standardized financial data to the Treasury Department by May 9. Treasury and the Office of Management and Budget are overseeing the implementation, which will result in searchable data on USAspending.gov.

According to various inspector general audits from last year, at least three agencies are not on track to meet that deadline, and another 12 have not made it clear whether they will. But financial transparency is still a priority for President Donald Trump’s administration, Matt Lira, special assistant to the president for innovation policy and initiatives, told an audience in Washington last week.

Keep reading this article at: http://www.nextgov.com/big-data/2017/04/trump-aide-signals-spending-data-will-be-critical-modernizing-government/137408

Last week’s announcement that the General Services Administration (GSA) had updated its Dun & Bradstreet contract will allow agency acquisition personnel and contractors wider latitude to use the standardized company information for purposes beyond mere identification.

But some transparency advocates consider the step insufficient.

In a Sept. 29 blog post, Kevin Youel Page, deputy commissioner of GSA’s Federal Acquisition Service, announced changes in the proprietary system for business identifiers in its Integrated Award Environment tracking system that are a “huge step forward in the goal to make data more accessible and readily available across government.”

Keep reading this article at: http://www.govexec.com/management/2016/10/gsas-new-contract-dun-bradstreet-draws-mixed-reaction/132205/