You are here: Home / Archives for DAWDF

The Section 809 Panel, established to find ways to streamline and improve the defense acquisition process, has advocated for drastic changes, primarily by empowering acquisition leaders to make buying and hiring decisions and boosting funding to train civilian acquisition workers, according to its latest report. 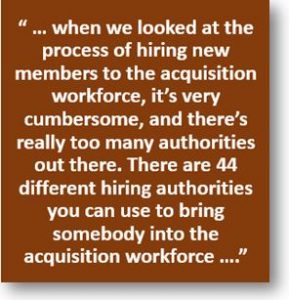 Section 809 Panel Chair David Drabkin and Commissioner and Ret. Army Lt. Gen. N. Ross Thompson III talk about the panel’s June 28 report, a second of three volumes on streamlining acquisition regulations, to get their thoughts on how successful the recommendations would be if adopted. 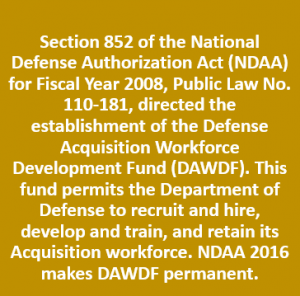 Congress established the Defense Acquisition Workforce Development Fund in 2008 to provide Pentagon officials with a dedicated funding source to recruit, train and retain skilled staff — the program managers, contracting officers, engineers, cost estimators and others who award and administer more than $250 billion in contracts annually. Steep personnel cuts in previous years had left the department heavily reliant on contractors, and lawmakers were concerned that Defense wasn’t effectively managing its programs.

But for years, the department struggled to allocate funds in a timely way, in part because the bulk of money for the fund is contributed by Defense agencies and the military services based on what those components spend on contract services. It took as long as 24 months to remit the payments through the comptroller, which resulted in considerable delays.

Keep reading this article at: http://www.govexec.com/contracting/2017/04/pentagon-needs-set-clear-goals-improve-acquisition-workforce/136786/

The Defense Department added its voice to a growing list of associations and lawmakers with ideas on how to improve the military’s acquisition process.

DoD’s ideas center less on what Congress can do and more on what it shouldn’t do.

Frank Kendall, the undersecretary of Defense for Acquisition, Technology and Logistics, sent a letter to Sens. John McCain (R-Ariz.) and Carl Levin (D-Mich.) back in June detailing seven areas where he thinks DoD needs help to improve acquisition outcomes.

For the first time publicly today at the AFCEA Acquisition Modernization conference in Washington, Kendall highlighted his seven recommendations.

Kendall said the biggest thing Congress could do is end the threat of sequestration in 2016 and beyond.

“2013 was a nightmare year. We actually implemented sequestration well into the year. We bought ourselves a little time with the deal that got us through 2014 and presumably through 2015. It’s coming right back in 2016,” he said. “We are working on the budget right now. The services are finalizing their [budget plans], and we will go through an exercise this fall where we will have to look at what the President will submit and something that is compliant with sequestration to see what the damage is. The damage is huge.”

Keep reading this article at: http://www.federalnewsradio.com/394/3676550/Kendall-shapes-DoD-acquisition-reforms-around-7-areas-

Data from the Government Accountability Office clearly show an upward trend in the number of bid protests, and procurement analysts told BNA there several explanations for the increase.

Chief among these, they said, are smaller federal budgets that allow for fewer overall contracts, along with a shrinking, less skilled acquisition workforce prone to mistakes.

Keep reading this article at: http://www.bna.com/shrinking-budgets-acquisition-n17179873902/

The Obama administration does not want Congress to cut funds for Defense Department acquisition employees’ training.

The administration opposes a House committee’s proposal to reduce funding for the Defense Acquisition Workforce Development Fund, cutting it nearly in half compared to fiscal 2012’s appropriation.

The fund is a key tool for the Defense Department to alleviate some of the long-standing challenges associated with training the acquisition workforce. It also provides additional funds for the recruitment, training, and retention of acquisition personnel. DOD expects to use the fund’s money to hire approximately 10,000 new acquisition personnel through fiscal 2015. Approximately $1.8 billion was allocated to the fund through February 2012, according to a recent Government Accountability Office report.

Keep reading this article at: http://fcw.com/articles/2012/07/05/workforce-training-funding.aspx.