You are here: Home / Archives for default

Owners face a ton of decisions when considering a new construction project: Who will do the architecture?  Where should we located it?  How big should the floor plates be? 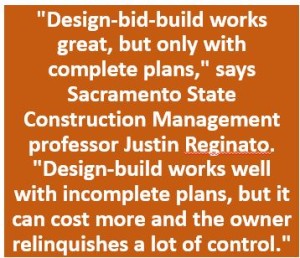 One decision that doesn’t always get much attention is just as important: Project delivery method.

That’s the term that describes the process by which the project will be designed and constructed, and it’s at the heart of the drama around Valley Medical Center’s long delays and spectacular cost overruns.

Keep reading this article at: http://www.bizjournals.com/sanjose/news/2016/01/25/county-ceo-says-design-bid-build-delivery-method.html

Should the government be allowed to declare a contractor in default and then invoke a secrecy privilege to withhold information the contractor says it needs to dispute that finding in court?

Two decades after the Pentagon canceled the Navy’s A-12 Avenger II stealth aircraft, the fight over who is at fault for the program’s delays and cost overruns has brought that question before the U.S. Supreme Court. Last week, justices on the court sharply questioned lawyers on both sides of the dispute.

The court’s ruling, which is expected before the 2010-11 term ends in June, could have broad implications for any company working for the U.S. on classified technologies—even more so given the intense budget pressures that are leading the Defense Department to cancel more programs.

The A-12 effort began in January 1988, when the Navy tapped a McDonnell Douglas-General Dynamics team to develop a stealthy carrier-based aircraft. The contractors quickly encountered difficulties, especially with the aircraft’s weight. After the first-flight deadline was missed, in the summer of 1990, the Navy extended contract deadlines.

But in December 1990, then-Defense Secretary Dick Cheney effectively ordered that the $4.8-billion project be abandoned. The contractors had never delivered an airplane.

In terminating the contract, the Navy declared the industry team in default. In other words, the Navy said the team had not done the work it had promised to do. So the Navy demanded $1.35 billion in payments back. Settlement efforts failed. And there began a long legal saga that has taken the parties looping through the Court of Federal Claims and an appeals court and even outlasted one of the original companies.

Essentially, Boeing, the successor to McDonnell Douglas, and General Dynamics argue that the government withheld critical information about stealth technologies and that led to delays and cost overruns. They were aware of the B-2 bomber and the F-117 attack aircraft, lawyers say, but they did not realize before entering into the contract that the government’s “superior knowledge” from additional, “special access” programs made it clear the A-12 weight target would be impossible to achieve.

When the contractors sought to prove that in court, the government said it would damage national security to reveal the necessary information, even to a judge. While it is possible the Supreme Court will delve into the privilege to withhold “state secrets,” it is unlikely. The justices posed no questions about that last week. Instead, they explored what to do about a contract dispute when such information cannot be used in court.

The A-12 program could be canceled legally, the contractors concede, but not with the “default” penalties the government is seeking to apply to them. Such a fault-free cancelation is said to be for the “convenience” of the government. The difference between that and a default cancelation could amount to $3 billion or more when interest is figured in.

“They seemed sympathetic,” Carter G. Phillips, the lawyer representing the contractors in oral arguments on Jan. 18, told Aviation Week. Indeed, at least two, Chief Justice John Roberts and Associate Justice Antonin Scalia, seemed to suggest that the law might require that when fault cannot be determined in court, neither side should have a monetary claim on the other.

“Why don’t we call the whole thing off and say nobody’s at fault?” Roberts asked. “It’s the ‘go-away’ principle of our jurisprudence,” Scalia quipped.

Acting U.S. Solicitor General Neal Katyal said it would be fine if the case were thrown out, but that would mean the government’s determination would stand that the contractors were at fault because they did not do the work as promised. But Phillips argued it should be illegal for the government to decide contractors are at fault if the basis for disputing that determination is not allowed in court.

The court’s newest justice, Elena Kagan, reversed the situation in a hypothetical question to Katyal: “Suppose state secrets had kept you from proving default [in court]?”

The contract allows a finding of default without having to prove it in court, Katyal replied. Kagan said that amounts to “tails you win, heads you win.”

But other justices seemed sympathetic to the government’s argument that even if classified information could not be brought into court, the contracting officer’s determination of default must stand. Otherwise, briefs for the government argue, contractors could simply seek disclosure in court of secrets to force the government to back off a default finding.

Speaking of the possibility that the court would rule that any contract dispute involving state secrets being withheld in court would automatically be deemed for “convenience,” Justice Stephen Breyer said: “We are not just throwing a monkey wrench into the gears of government contracting, we’re throwing in the whole monkey.”

Justice Sonia Sotomayor suggested major defense contractors should realize that forcing secrets into the open to defend their work in court would not be an option.

“You always knew the government could do this,” she told Phillips of the default finding.

Contractors are free to negotiate for a clause that would shift the burden of proof for default, the government maintains, but these contractors agreed not to.

Sotomayor also was credulous about Boeing’s and General Dynamics’ claims that the government’s withholding of its stealth expertise is the root of the A-12 problems: “I have to say, it’s an odd thing to bid on a multi-billion-dollar contract on the assumption that they are going to get some technology that they haven’t even specified. I mean, we’re bidding for their research and development.”

The case has attracted interest beyond the contracting community because of the state-secrets aspect and how it could affect cases such as those of suspected terrorists held at the U.S. base at Guantanamo, Cuba. A friend-of-the-court brief by The Constitution Project says classification has greatly expanded since a 1953 Supreme Court ruling on the privilege to withhold state secrets in court. It says history shows that the assertion of potential damage to national security is often unfounded. The group argues that judges should be required to review secret material themselves before accepting the government’s claims.

Boeing and General Dynamics are supported in friend-of-the-court briefs by the U.S. Chamber of Commerce and the National Defense Industrial Association. Indeed, Phillips, who argued the contractors’ side in court, is the lead attorney in the matter for the Chamber of Commerce, not one of the companies.

“Allowing the federal government to gain financially from the [secrecy] privilege at the expense of the government’s contractors is unconscionable,” the chamber asserts, adding that it would turn a “shield” into a “sword.”