You are here: Home / Archives for espionage

The government is seeking to eliminate all traces of cybersecurity firm Kaspersky Labs from federal systems, issuing a new interim rule in the June 15 Federal Register to extend the governmentwide ban to contractors. 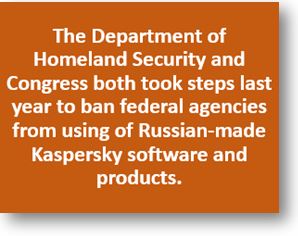 The rule, issued by the General Services Administration, the Department of Defense and the National Aeronautics and Space Administration, amends the Federal Acquisition Regulation to require that all contracts and solicitations finalized after July 16, 2018, include language prohibiting the presence of Kaspersky hardware, software and products.

The rule applies not just to federal contracts but also smaller “micro” purchases and the purchase of commercial off the shelf items, which are often exempt from many contracting regulations. The notice states that the interim rule was issued without prior opportunity for public comment due to “urgent and compelling reasons.”

Keep reading this article at: https://fcw.com/articles/2018/06/15/kaspersky-rule-contractors.aspx

The Washington Post revealed on July 23rd that several local governments across the U.S. are using a Russian brand of security software that the federal government fears could be leveraged by the foreign country for cyberespionage.

In July, the federal government removed Kaspersky Lab, a Moscow-based company that sells anti-virus security software, from its list of approved vendors. Meanwhile, nearly all the local governments interviewed by the Post appeared unaware of the controversy. Upon learning about it, most said that they had no immediate plans to stop using the product.

The news is merely the latest development in an ongoing debate about whether local governments are doing enough to protect themselves from cyber threats.

Cybersecurity experts have long been sounding the alarm about local governments’ vulnerability to cyberattacks and the impact such an intrusion could have. They say most local governments face great barriers to protecting their data and systems, including lack of funding, shortage of cybersecurity professionals and general ignorance about the seriousness of the threat.

Keep reading this article at: http://www.governing.com/topics/mgmt/gov-local-governments-cybersecurity-kaspersky-russia.html